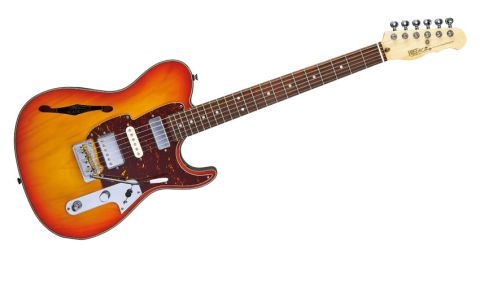 The Fret- King has the first-class playability, tonal versatility and sensible price tag to make it a serious contender for your loot.

The Fret-King Black Label range gets another string to its bow in the form of the tonally versatile Country Squire Semitone De Luxe.

Once upon a time, finding one guitar that scratched the itch of all of your tonal requirements likely involved chiselling the hell out of some poor old Tele or Strat to cram an overwound humbucker into its ravaged body.

These days, thanks to the likes of British hardware and pickup guru Trevor Wilkinson, you can take your pick from countless modified classics without troubling your toolbox. Which brings us to our review...

One of the new additions to Wilkinson's well-respected Fret-King Black Label range, the Country Squire Semitone De Luxe takes an established design and goes all Inspector Gadget with the spec sheet. The story begins with a two-piece centre-jointed, semi-hollow alder body bolted to a slim C profile maple neck. The neck itself has a 254mm (10-inch) radius rosewood 'board and 22 well-finished medium jumbo frets.

So far, so unremarkable... but here's where it gets interesting. Unlike the American classic that inspired it, the Country Squire has a vibrato unit. Instead of the six- saddle format, the Wilkinson WVT vibrato has three vintage-style brass blocks to retain some of the T-type vibe. At the other end of the guitar, you'll find Wilkinson's E-Z Lok machineheads with staggered shaft heights to avoid the need for string retainers.

The Semitone De Luxe adds to its Swiss Army Knife-like versatility with a Wilkinson WHHB humbucker in the bridge position, a WHS single coil in the middle, and a WDG mini-humbucker at the neck. The wiring loom consists of a master volume, a concentric tone and Vari-coil control, and five-way pickup selector switch. Let's back up a little. 'Concentric' means that the tone and Vari-coil are stacked. The tone is the large knob on the bottom; the Vari-coil is the smaller knob on the top. What's a Vari-coil? It's a variable coil-tap that shuts off a proportion of a humbucker's windings to produce single coil-like output and tone as you turn the control down - handy.

Plugging in, we find that while the bridge humbucker is all bright and spunky Dr Jekyll through a clean channel, stepping on the gain unleashes its filthier Mr Hyde persona. Winding down the Vari-coil reveals a tone that's closer to the sweet sound of a Strat than a brash Tele, despite the clever bridge saddle setup.

Combining the coil-tapped bridge or neck 'bucker with the middle pickup draws out sweet Hendrix rhythm and lead tones. We also like the clarity of the neck mini-humbucker. It's just the thing for blues noodling, where you want plenty of dynamics without typical full-size humbucker slush.

The Semitone De Luxe's looks might be more Nashville session ace than tattooed metal obelisk, but it easily covers that wide tonal remit - and all points in between.