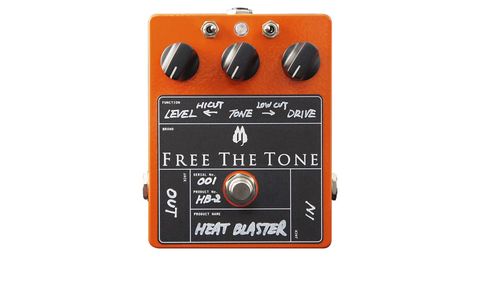 A superb, fat rock distortion with edge to cut through in real-life playing.

This latest box from the revered Japanese brand Free The Tone isn't pigeonholed into a genre, instead the Heat Blaster is billed as a "truly modern distortion sound".

Yuki Hayashi has used a JRC072D opamp here, in conjunction with red LEDs for the clipping (most pedals use diodes). Switching is FTT's true bypass - the signal passes through only one set of contacts when bypassed - and current draw is a non-battery hungry 7mA.

LEDs tend to impart a higher headroom, crunchier, less compressed distortion character than diodes (depending on the rest of the circuit, of course), and we'd say that bears out in the general response and feel. It has bite aplenty with a great deal of sensitivity - the polar opposite of over-compressed, fizzy metal blandness.

Low-cut tightens things if you don't like a loose, almost fuzzy bottom end at higher gain levels. With the low left in and the high cut, there's some classic Brian May about the tone. Switch the high back in and the extra presence sounds rifftastically riotous on the end of a maple-necked Strat with a bridge humbucker.

Defiantly neither Satch- nor Vai-smooth, the HB-2 offers the amp-like edge and depth you might associate with anybody from John Scofield to Guthrie Govan. Hardly 'affordable', but still a must-try distortion.