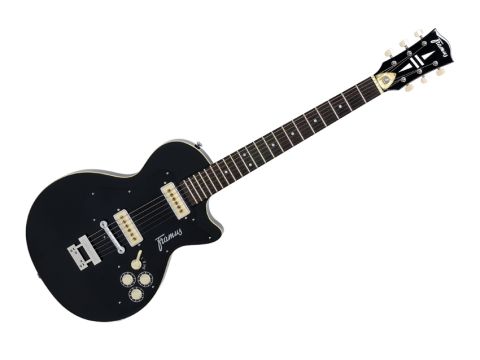 An instrument that successfully looks back to the past but also possesses modern performance appeal.

Launched in 1958, the Hollywood line offered the first solid electrics from German maker Framus and, like many others of the era, went for the Les Paul look, being small-bodied, single-cutaway six-strings. Equally in keeping with most of Gibson's competitors, Framus opted for semi-solid construction to help keep the weight down.

Original Hollywoods shared the same styling but employed differing configurations of single-coils. Models 5/129, 5/131 and 5/132 featured one, two and three pickups respectively, while the 5/128 and 5/130 sported a novel single sliding unit.

Framus instruments first came into the UK via importers Dallas, but those brought here by rivals Besson bore that company's brand or its alternative Aristone logo. In 1961, keeping pace with changing guitar design trends, the Hollywood switched to a twin-cutaway shape and then by the mid-'60s the range had been phased out in favour of the more Fender-influenced Strato solids.

Suiting their number-one status, the Hollywoods have been chosen as the basis for the first Framus Vintage six-strings introduced this year. As the name suggests, the guitars revive the original oldies, and, while it might've been nice to see the sliding single-coil or triple-pickup models again, Framus has sensibly opted for the more practical two-pickup 5/131, offered in both Singlecut and Doublecut form.

Both 2011 models initially look to be pretty close copies but further inspection reveals a few changes, suggesting that the end results are intended more to evoke the character of the originals. That said, Framus has gone to considerable trouble to re-create some of the original key components and these undoubtedly enhance the individuality of these guitars.

The slim Framus headstock stays true to Hollywood tradition, being Gibson-ish and sporting a split-diamond motif that strongly hints at the Les Paul Custom. The face also carries an accurate imitation of the classic Framus triangular metal truss-rod cover, complete with the company's distinctive globe logo.

Tuners are repros of the original type and accordingly feature Framus-branded metal covers, although the cream plastic buttons are now more angular than oval.

Like other Framus six-strings of the time, the original Hollywoods came with this maker's 'Stiletto' neck, which was certainly slimmer than many of the tree-trunk sized examples employed back then.

The new model's glued-in length of mahogany is more finger-friendly, adopting meaty but manageable measurements. These contribute to a correspondingly big sound, while mainstream 'C' profile proportions play their part in an instantly easy playability.

A nicely cut nut leads on to a lightly radiused and smooth surfaced rosewood 'board. Like the headstock, this was edge-bound on the originals, but Framus now limits this luxury touch to the more expensive Doublecut.

As in the '60s, 21 frets are spread over a Gibson-style (628mm/24.75-inch) scale length, but they're bigger than before and finished to a very high standard. The number of position dots stays the same and they still stop at the 15th fret, as do the side markers.

Body construction comprises a semi-solid timber centre section that's faced front and back with plywood. The original Hollywood was quite slim, depth-wise, but a few millimetres have been added here, while the single cutaway is slightly shallower than before and the horn is correspondingly more blunt.

These amendments make the body a bit beefier in comparison, but weight is still a very back-pleasing 3kg.

Broad cream edge binding contrasts an otherwise all-black, high-gloss finish that's fingerprint-friendly and excellently executed. Back in the sixties, Hollywoods came in a variety of eye-catching metallic colour schemes, but red-to-gold sunburst is the only alternative on offer here.

The thin black scratchplate is still metal though, although the face now has a textured matt finish, rather than being smooth and shiny. An engraved large Framus logo is also present, though it's thicker than before.

The simple, single-saddle metal bridge accurately apes the original design and intonation is surprisingly good and points to optimum positioning, which wasn't always the case on the earlier Hollywoods. Securely screwed to the body front, the square-edged short tailpiece is another model-specific piece of specially re-made metalwork.

Two large single-coils look to be accurate repros of the originals; each is encased in a chromed metal housing that surrounds a bevelled plastic top containing six sizeable screw polepieces. The accompanying cream controls are yet more close-copy components, although the fluted knobs are now the push-on variety.

Circuitry stays true to type, consisting of master volume plus separate bass and treble pots, while the four-way rotary selector provides all three pickup permutations and 'off', with the latter option usefully doubling as a killswitch.

For all its muscular looks, the Hollywood Singlecut has a somewhat skinny acoustic character, dominated by an almost resonator-ish, hollow-toned, plinky resonance. This character still comes across after plugging in, adding an airy openness to single-coils that don't sound as sizeable as they look, although output is more than ample and enhanced by an attractive tonal clarity.

The neck position delivers an expressive bluesy, snappy twang, while the bridge option is thinner, but adds some Gretsch-style zing and bite to an inherent honk.

With both pickups selected the sound takes on a Tele-like, tubular tonality and this position is usefully hum-cancelling.

Matching the Hollywood's vintage image, this aural menu suits retro playing styles, such as clean-cut instrumental work, surf twang or clangy sixties pop. Jazz, blues or country are served equally well, while the Hollywood also takes to some gain-induced dirt, although too much soon tends to blur the sound and foster feedback.

The bass control is very on or off in operation, thinning things out when only slightly turned back, but doing nothing discernible thereafter. In contrast, the tone pot decreases top end in a more gradual way, although even when fully off the results are far from woolly.

Despite often losing out to Hofners in the popularity stakes, the original Hollywoods were a cut above a lot of the competition of the time and these recreations maintain the same emphasis on quality.

Framus has put a lot of effort into ensuring that the build and components echo the originals and also improve on them where possible. The end results certainly reflect this degree of care, but these instruments are undeniably niche.

There is some nostalgic appeal for older players, but they might remember the originals as lower-price electrics, and they can still be found for a lot less cash than the new equivalents.

And so these new guitars should really be judged on their own merits: as distinctive instruments that offer an individual, retro-orientated take on looks and sound. Viewing the Hollywoods in this light makes them a far more appealing, and accordingly good value, proposition.