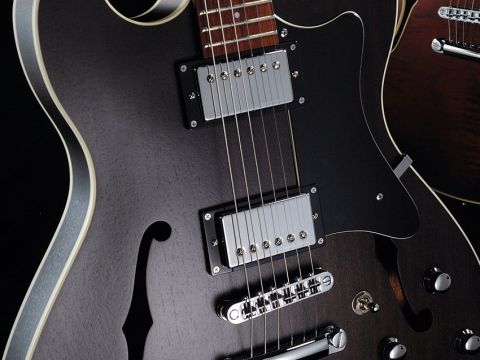 This less posh Mayfield is quite simply an excellent working thinline.

By its own admission Warwick took a while to get Framus right. Over a decade into the brand's relaunch, however, the quality and design has gone from strength to strength and the new Mayfields really are up there with the big boys.

The inspiration is obvious, but proper laminated-body thinlines in the style of Gibson's ES-335 aren't too common. This paucity of competition is one reason why the ES-335 remains such an electric guitar icon.

The Framus Mayfield, however, uses pressed laminate top and back, albeit with solid sides, and a maple centre-block. Pretty much the real deal.

Weight is good too, more vintage-like than many contemporary, heavier Gibson ES-335s.

The Pro version, certainly as supplied for review, is not only more affordable than its higher priced Custom counterpart but also ditches any bling.

The top and back here is a mahogany-faced laminate, again with solid mahogany sides and neck. The satin finish is subtly translucent, a sort of brown/black, you can feel the wood grain, and the whiter binding (without purfling) runs around the top and back edges but not the f-holes.

This latter point could be seen as negative in terms of quality if the f-holes weren't so perfectly cut and finished - there's no shabby finishing anywhere. There's a little more acoustic resonance to the guitar; this thinner and softer finish won't be as hardwearing compared to the Mayfield Custom's High Polish, which depending on your preference could be a good or bad thing - it'll certainly age quickly after a few gigs!

Continuing the utilitarian vibe, the 'board is rosewood with simple small dot inlays; there's no central inlay on the headstock either, but aside from different Seymour Duncan pickups - a Jazz/JB combo as opposed to the Custom's Alnico II Pros - it's identical to its more expensive and plusher sibling.

The Pro is the dirtier, rawer sibling of the Mayfield range. From the feel of the guitar's finish through to the outputted sounds; its beefier JB bridge pickup increases front-end gain and adds a rockier tonality with a smoother and darker high end.

The neck pickup does much the same, still with a thinline elegance just with a little more grain to the tone. The mixed pickup position is slightly less wide, again rootsier than the more sophisticated Custom.

It doesn't cut as much as the Custom, either, and although a little thicker in the mid-range it still has an openness that you'd expect from a guitar like this.

The new Mayfields prove that Warwick - who owns Framus - can make guitars every bit as well as it makes basses. The Pro is certainly the more utilitarian of the range with its rougher tone.

The only thing that we'd like to see would be a bigger neck, but everyone's different and the slimmer necks here might well be your personal ideal.

Price-wise the Pro seems fair bearing in mind the limited competition and no doubt street prices will be trimmer still.

The big 'if' of course is that many, many players want an ES-335 with Gibson on the headstock, and why not?

Framus, therefore, has a lot to compete with on that level but in terms of build quality, playability and sound it has little to worry about. If you're looking for a thinline with class, elegance and tons of variety in terms of specification, this is a very good place to start.