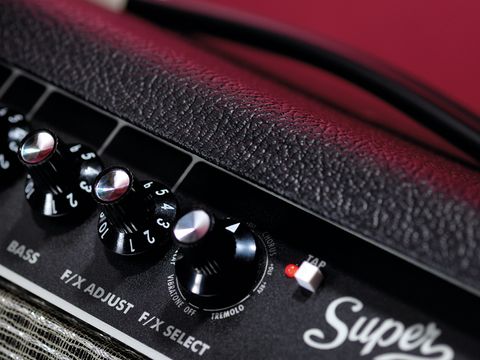 For home use and the occasional small gig, the Super Champ X2 is hard to beat at the price.

Technology's stealthy and relentless onward progress means that today there are many people whose entire music collection exists not as a cupboard full of dusty vinyl LPs, but as series of zeroes and ones, stored somewhere 'out there'.

With internet access to countless live video tutorials and cheap editing software that can not only slow down a guitar part, but keep it in the original key, play it backwards or even upside down, things have never been easier or more fun for guitarists. For those who want to record their work, software often completely takes the place of the traditional valve-powered guitar amplifier, with a bewildering range of programs.

Fender, which practically invented the guitar amplifier over six decades ago, has for some years experimented with blending both technologies in amps such as the Cyber Twin, Mustang, Bronco and GDEC. That brings us on to this new addition, the Super Champ X2 ,which also taps into Fender's popular FUSE software portal.

Out of the box, the Super Champ X2 rig looks like many other modern Fenders, with a smartly finished cabinet that borrows mainly from the early '60s 'Blackface' era for its styling, sporting a flat aluminium badge and slightly downsized reflector knobs to keep everything in proportion.

Inside the steel chassis, the electronics are mostly PCB-based, with everything looking clean, tidy and robust enough to handle non-stop gigging. Like its eighties namesake, the Super Champ X2 is powered by a pair of 6V6 output valves, with a single 12AX7 driver, but that's where the similarity ends.

The X2 boasts a digital front end with two channels. The clean channel offers a generic 'Blackface' tone and features a single volume control. The drive channel controls consist of gain and volume knobs, along with a voice knob that selects 16 different voicings covering some of the most well-known amp tones - vintage and modern, American and British.

Moving past the shared treble and bass controls, there's another knob called FX select that offers a choice of 16 effects, with an FX adjust knob to vary the main parameter - usually the effect level. There's also a handy tap button that enables you to manually select the delay time if you have delay selected, or the modulation rate for chorus and rotary speaker effects.

The X2's rear panel is relatively sparse, featuring a single speaker outlet, a line out for connection to recording or PA equipment and a jack for the optional two-button footswitch, which selects channels and bypasses the effects. Finally, the most significant rear panel feature is the USB socket, which facilitates direct connection to your PC/Mac and interfaces with Fender's FUSE software.

With this program you can change preamp voices and effects defaults, get into deep editing of certain effects and amp parameters and stream audio from the X2 into your computer/DAW. Once your amp is registered, there's also free entry to the Fender community, with access to loads of backing tracks and amp setting info.

Overall, the Super Champ X2 looks like a Fender amp should: smart, solid, dependable, and easy to use.

Amps with a digital front end and a valve output stage should theoretically provide the best of both worlds, combining excellent versatility and programmability with power and a wide dynamic range - and the Super Champ X2's sounds don't disappoint.

Channel one has that rich sparkle associated with the best Fender 'Blackface' amps from the early-to-mid-'60s, with a sweet treble, smooth bass response and a tight, restrained mid-range that makes for perfect rhythm parts.

Channel two features 16 different clean and overdriven voicings that approximate most of the favourites from Fender's back catalogue, plus a few obligatory extras.

All of them prove to be surprisingly sweet and very responsive; our favourites include the dirty/compressed tweed Deluxe and '65 Deluxe voicings, which sound very close to the real deal. Some of the heavier rock and metal tones tend towards fizz, but remain highly usable.

The effects are what make or break great sounds on digital amps, and the 16 effects loaded in the Super Champ X2 are excellent, providing great basic sounds with no danger of getting bogged down in endless parameters. We especially like the Vibratone rotary speaker simulation and the reverb/delay combination.

It's simply a case of selecting your effect and then tweaking it to taste with the FX adjust knob - there is no 'store' function because there are no presets and no MIDI control, but the Super Champ X2 does remember your last settings at power off.

There's more than enough power for small unamplified gigs, thanks to the pair of 6V6s, and the nicely tuned 1 x 12 enclosure, but annoyingly if you want to swap channels and bypass the effects you'll need to buy a two-button footswitch - Fender hasn't included one in the package.

Recording is where the X2 really comes into its own: the FUSE software means you can dig a little deeper into the preamp's settings and tweak features such as bias and power amp sag, as well as edit extra effects parameters. After a somewhat lengthy download, it installs quickly and runs smoothly on our Windows 7 PC. The graphics are smart and laid out impeccably on the screen, making editing a snap. The Fender universal ASIO driver also behaves very smoothly, making for trouble-free recording.

The recorded tones are authentic, overdrives respond well to picking dynamics and the reverbs are smooth and detailed. It's certainly a step up from many current digital effects products and while the heavier distortion tones are just decent generic rock/metal stuff, some of the classic Fender amp models are very convincing.

Aimed at the home recording guitar player who wants to step out and play the occasional small gig, the Super Champ X2 ticks pretty much all the boxes. It's built to last, and is good-looking too.

While it may not be the greatest live digital guitar amp out there, the 6V6 power stage gives it an edge over many solid-state products and it comes into its own when the recording light goes on. There aren't that many amps that combine these features as well as the X2, but there are a few, and set against them the Super Champ represents good value.

Above all else, it's fun to use, and surely that's what it's all about at the end of the day.