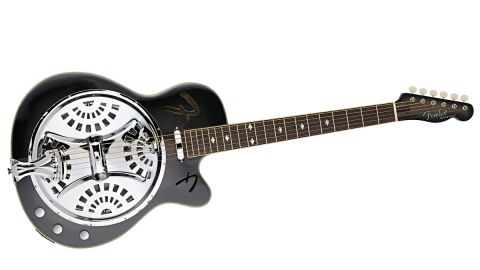 A pretty valid instrument for sure, but there's a smattering of flaws holding the Roosevelt back.

Not too long back, Fender had acquired - or inherited - quite a collection of acoustic brands under its worldwide distribution arm.

There was Guild and Ovation (USA and import), Takamine, a smattering of Gretsch acoustics, and a growing number of affordable Fender-brand acoustics coming from China and Indonesia. We even saw some Fender USA models, too.

Cut to the present day, however, and it's a very different Fender. Having shed those other acoustic brands (Gretsch excepted), Fender is focusing on its own acoustic brand, albeit with no current signs of any USA acoustic production.

The Roosevelt goes for a magnetic/piezo hybrid setup with a Telecaster-style magnetic neck pickup and Fishman pickup on the resonator cone, with volume and tone for the former and just volume for the piezo. The two sources are balanced by a Fishman Powerchip active preamp. The output is mixed-mono only on a side-mounted plate that also holds its necessary battery.

The guitar is made entirely from laminates, spec'd with a flamed maple-faced top, though through the mainly opaque black there's virtually no flame visible. The back and sides are laminate mahogany here, with a wide-heeled mahogany neck.The Roosevelt has a scale length slightly shorter than the Gibson standard, coming in at 629mm.

The neck has a quite a rounded and quite deep C section with pretty electric-like string spacing at both the nut and saddle. Shipping with 0.012-gauge strings, the Resonator really isn't aiming for serious slide. It's easy enough, but in drop tunings (not least with its shorter scale), we'd be upping the string gauge to increase tension, and likely the action, too.

Plugged into our stage rig, the Roosevelt immediately gives us a wall of feedback. The cone's pickup is, err, very lively. It also needs a completely different signal path that actually keeps the EQ more linear.

In fact, a little mid boost helps both magnetic and piezo sounds, and it helps getting an authentic electric slide sound. On its own, that cone sound is very tinny - a huge contrast to the almost soft- edged neck single coil.

The tone control is simply a treble roll off (which would have been more help on the piezo side), but add a little of the piezo to the magnetic and you have a pretty usable pseudo-'acoustic' resonator voice. Of course, it's only a mono output, but switch the signal path into some rootsy distortion for that neck pickup and you've got quite a stage buddy. Just take care with the piezo pickup.