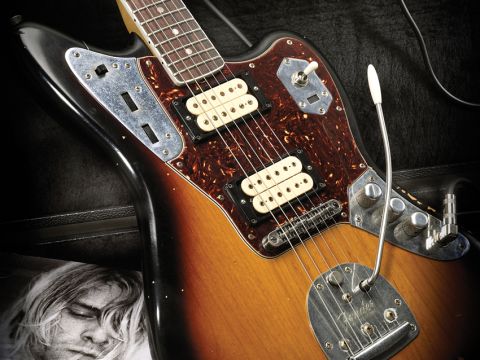 Fender has done a remarkable job of recreating Cobain's Jaguar with accuracy, taste and, above all, respect.

We brought you news of Fender's new Kurt Cobain Jaguar a couple of months back. If you didn't see that, we'll quickly fill you in.

Cobain's famous left-handed '65 Jag was bought second-hand through the LA Recycler, and became his main touring guitar for the Nevermind era. Its previous owner had heavily modified it with a black chrome bridge, a pair of DiMarzio humbuckers, a threeway pickup switch and an extra volume control.

Hear the Kurt Jag in action over at the Total Guitar blog.

Fender has included all of these modifications on its new Mexican-made replica, and the Three-Colour Sunburst finish has been applied with nitrocellulose, then relic'd to reflect the battered finish of Kurt's original.

Opening the included hard case reveals a guitar that looks even better for real than in the pictures. Regardless of your take on aged finishes, this has been executed so well that - bar some of the 'buckle rash' on the back - every ding, dent and scratch looks authentic.

The lacquer is cracked in places, resulting in a beautiful vintage-looking patina, while the pickup's pole pieces are rusted. The metalwork's also been aged brilliantly, and you'd be hard pressed to tell that this isn't really an old guitar.

Jaguars have a 24-inch scale length - an inch-and-a-half shorter than a Strat. This can result in spongy string tension and tuning problems, but Fender has fitted this guitar with .010-052 gauge strings. The result is taught strings, even in drop tunings.

Kurt wasn't known for being a tonehound, yet it's this very fact that has made his sound so sought after. It's abrasive, aggressive and unapologetically raw.

Thanks to the combination of an alder body, Super Distortion 100 bridge pickup and solid Adjusto-Matic bridge, you get a biting, resonant sound when you apply distortion to the bridge position. It's thicker than a Strat sound, but with more cut than a Les Paul.

Meanwhile, the DiMarzio DP103 PAF has a slight pump towards the midrange that makes clean and semi-distorted playing warmer, and very punchy. Think Heart-Shaped Box and you're not far off.

The KC Jag also includes a working Jaguar rhythm circuit, which overrides the Jag's three-position switch and volume/tone pots, and switches in the neck pickup only. The circuit also has its own separate volume and tone roller controls.

Kurt never really used the rhythm circuit on his Jag, but with it switched in and the tone rolled back, you can get a mammoth stoner-rock tone and then return to a throaty bridge pickup sound with the tone on full at the flick of a switch.

Likewise, Cobain never used the vibrato, but Fender has included it here for those who want it. It's smooth and light (the classic surf vibrato sound) and holds its tuning thanks to the upgraded bridge.

The KC Jag isn't without its flaws - that extra volume pot makes control changes awkward, the three-way switch is positioned in a prime location to be knocked, and the Jaguar scale length will always be divisive. You can hardly argue with any of these features, though; it is what it is.