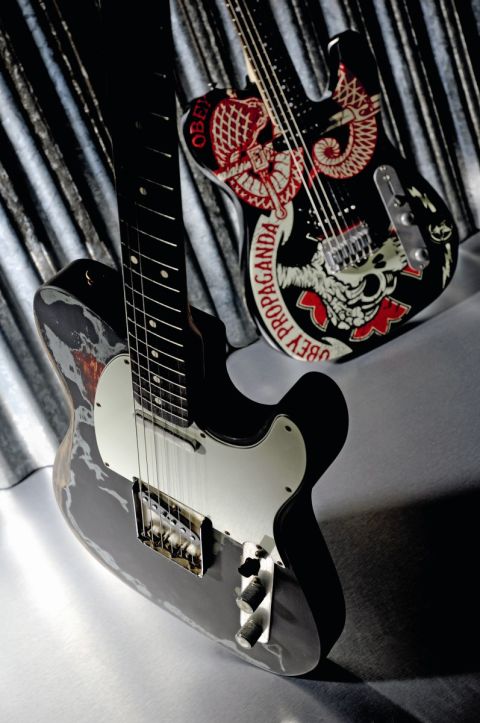 A suitable tribute to one of the country's unsung heroes, and at a good price as well.

Joe Strummer: hero, icon, co-writer of The Clash's (and therefore some of the UK's) best known tunes, and arguably the definition of an English rhythm player.

Usually leaving any dalliances above the ninth fret to his more technically able partner in crime, Mick Jones, his perfect chord work and gyrating right leg were a feature of the band's live performances and his own solo material.

More often than not, he used one single guitar during the band's career, a 1966 Fender Telecaster that, according to various interviews with Strummer, was a stock three-tone sunburst model complete with three-ply white scratchplate.

He bought it in 1975 for £120 and, when The Clash's career began in earnest, they aped fellow punks the Sex Pistols in designing clothes with various logos, lyrics and designs stencilled on them.

The logical step was to similarly pep up their instruments. Manager Bernie Rhodes convinced Joe to include his old Tele in a batch of guitars that were refinished at a car spray shop: in fact, the original guitar was sprayed with a layer of grey primer and black topcoat, scratchplate and all!

Here we have an exclusive look at the Joe Strummer Telecaster.

Irrespective of the original's history, it's all for nothing if the associated guitar doesn't come up to, er, scratch.

It's worth mentioning that the Strummer is in fact based around all of Joe's Teles, rather than specifically the battered '66 that fans tell us now resides in Cleveland at the Rock And Roll Hall Of Fame (something they were reluctant to confirm at press time).

In effect, then, the guitar can be regarded as a Mexican-built vintage-style Tele and, as far as the basic spec goes, there's not a great deal that sets it apart from a Classic Series 60s Tele.

The vintage-style Alnico pickup set, three-way selector and three saddle bridge are all present and correct, as is a modicum of rusted ageing on the hardware: it's only when you look closer that you realise the Strummer is something rather special.

In fact, you hardly have to whip out a magnifying glass to spot that the body's polyurethane finish has been heavily worn and, on small areas on the body's front and more significantly so on the rear, there are areas of sunburst.

The look is similar to the Rory Gallagher Strat, although the genial Irishman never saw fit to spray his entire guitar grey and black! Thankfully Fender has included a mint-green plate here rather than mimic the spattered and battered old thing on Joe's original.

Included with the first 1,500 examples is an exceedingly cool set of DIY stickers and stencils, designed by Shepard Fairey and intended not necessarily as exact recreations of Joe's own customisations, but more as an overview of his career from The Clash through to The Mescaleros.

Instructions are included, as is a reprint of a letter sent to Strummer by the artist who is an unashamed fan. Obviously we're not able to set about this example with our spray paint but, if we were, we'd consider refinishing the guitar in black before we started. But would that be missing the point?

We've saved the best until last here: the neck wouldn't look or, more importantly, feel out of place on a Masterbuilt Telecaster. The grade of rosewood used for the 'board is of a highly grained nature, while the wear on the maple has to be seen and felt to be believed.

Before handling the guitar you fear that Fender has gone too far with the sheer scale of the shaping, even though it's fair to assume that Strummer's own guitars probably fared even worse.

However, once you start to play simple chords, you realise that the line of finished maple that bisects the two areas of worn wood fits perfectly into the soft area of the hand between your thumb and first finger. Strummer was no Steve Vai, instead hammering out chords.

Thus the top edge of the neck here is virtually flat all the way to the seventh fret, just as it would be if you played standard chords for endless gigs and sessions.

For chording, the guitar plays wonderfully well, although thin vintage frets and a small 7.25-inch radius 'board make more modern lead styles much more of a chore.

We're hoping that if you're into that sort of playing, you're not really looking at this guitar. Whether you'll be able to come up with anything as iconic as London Calling is anyone's guess, but you won't be able to accuse the guitar of holding you back.

Information concerning Strummer's backline is scarce, but we do know that he favoured vintage Music Man combos, specifically the 210 and 212 HD models.

Not unlike classic Fender amps in style and tone, the harder you hit them, the more they drive, and Joe hit his strings with a mighty hand.

That said, the Strummer doesn't react or sound any different from any other Telecaster that boasts a traditional electronic spec and, although it's impossible not to bash out one's personal selection of Clash tunes, tonally you could do it just as efficiently with many other Teles.

We've mentioned just how easy the guitar is to play, and all associated styles are simple to get to grips with here. The Alnico magnet pickups keep it all classic sounding - there's no extra beef or windings required for straight up punk rock!

At £839, the Strummer is exceptional value and we're already hearing reports that the guitar is selling like gold-plated hot cakes.

Remember though that, aside from the commendable wearing of the fixtures and livery, not to mention the wonderful neck, the Strummer offers next to nothing in real terms over a model such as the Highway One Tele.

However, it's very close indeed to the whole vibe of Fender's Custom Shop, and in this day and age of £15,999 custom guitars (and the Time Machine Relics over £2,000), the Strummer begins to look a very good buy.

We can't stress just how good the neck is and if you're able to grab an example that includes the Fairey customisation kit, you're in for a ton of fun before you even plug it in. Although it certainly isn't cheap by most people's standards, this is a beautiful instrument on so many levels.

It's a great time to be into the humble Telecaster and, if this is anything to go by, we can't wait to see what Fender comes up with next. One thing's for certain - they're surely not going to be able to make the Strummers fast enough. Here's hoping Springsteen is next!