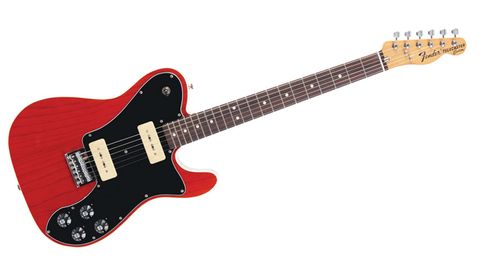 As guitarists, we all want to be different. It's written somewhere in the universal DNA of every six-string slinger, and we're all slaves to it. You want your own style, your own sound, and a guitar that the adoring masses will associate with you and you alone.

Well, Keith Richards may have nabbed the Telecaster, but Fender's Mexican-made FSR (Factory Special Run) dares to be different, with a quirky, limited-edition twist on the classic format to invoke a sense of exclusivity.

You need only take a cursory look at the FSR Telecaster Custom to see the concept in action: tried and tested shapes given a seductive makeover and packed full of unusual features. Plus, with just 42 examples available in the UK, they've certainly got the all-important rarity factor.

There's no denying the FSR Tele delivers in the looks department, especially in the Sunset Orange finish we got our paws on. It looks warm to the touch, and the cream binding paired with white soapbar pickups sets the whole ensemble off in style. There's an abundance of retro touches here, too, from the bullet truss rod nut to the black knobs and pickup selector, lending this Tele an air of sophistication.

Of course, good looks aren't everything. Telecasters are famously versatile, and this is no ordinary Tele, remember. That pair of Black Dove single-coils certainly makes things interesting. Have no doubt, this is a beast of a guitar masquerading as a coquettish innocent, fluttering its eyelashes before dragging you down an alley and beating you round the head. The P-90-style pickups bring a brasher, spikier set of tonal options to the party, rather than the slinky sharpness of the standard Tele's single coils.

This is all good news for the rocker, the FSR Telecaster being particularly well suited to fuzzed-up indie rock and lightly distorted rhythm playing. The combination of alder body and through-body string anchors ensures there's still a bit of bite on hand should you need it, but there's endless fun to be had swimming in seas of distortion.

A maple neck topped with a rosewood fingerboard only adds to the dusky look of this FSR, and it's a thoroughly pleasant C shape that sports a lovely high-gloss finish.

The three-bolt neck plate, hefty machineheads and 70s-style logo all add to the allure, an elegant set of appointments that will flick the switches of any retro fetishists.

In the end, the real clincher with the FSR Tele is its individuality. It's a little on the expensive side, but sometimes that's the price you pay for standing out from the crowd. Its limited-edition nature means you won't see hundreds of other guitarists brandishing the same axe, and that's a great feeling to have.