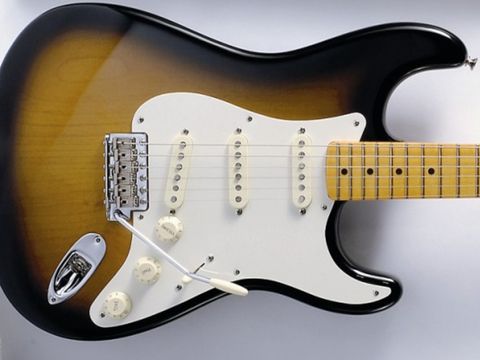 Signature guitars are a minefield of whim and fancy. What represents the Holy Grail to one guitar star means little or nothing to anyone but the artist's most diehard fans. But Eric Johnson knows Strats inside out. He understands aesthetics, is a stickler for playability and his views on great tone are legendary. Along with Fender he has created the perfect guitar for lovers of vintage Strats who want something extra.

Anyone familiar with Eric Johnson will know that, apart from his magical touch on the guitar, he strives for the perfect tone. Eric wants to evoke the smooth, singing voice of the violin in his lead passages and so hates sounds that are thin and spiky, preferring thick tones that fall from his guitar like liquid.

A true aficionado of vintage Fender Stratocasters, Johnson is someone who knows better than most how the world's favourite electric guitar could be 'improved'.

And with that in mind he got together with Fender and came up with this very retro-looking instrument. "They used my favourite Stratocaster," Eric tells us. "It's a 1957 sunburst with maple neck that I found in Florida when I was on tour a few years ago."

Mated to this would be a quarter-sawn tinted maple neck with the smoothest transition between neck and headstock, armed with 21 medium-jumbo frets and with a modern, 12-inch fingerboard radius.

Eric likes his Strats to be fitted with the full five springs but not 'blocked up' as with Eric Clapton's guitar. "All my guitars are like that," he confirms.

Not a fan of the tricky-to-negotiate Strat back-plate with its fiddly string-loading holes, Johnson decided it would be omitted from his signature guitar.

But there's more to it than that. "Actually the backplates are removed from all my guitars because I think they sound better with them off," he says.

Johnson wanted his Strat to look as 'normal' as possible. Due to his desire for a string-tree-free headstock, one millimetre or so has been skimmed from its front surface and staggered Gotoh tuners fitted.

"The reason I did this is because the guitar stays in tune better," explains Eric. "It was my idea to stagger the tuners, then Michael Braun at Fender made it work by skimming the face of the peghead to increase string angle over the nut."

Other personal features include a parchment-coloured, single-ply scratchplate, an authentic vibrato block - "It's closer to those used in the 1950s and 1960s; the holes are smaller and the string doesn't go in as deep" - and a discreet neck-plate bearing the guitarist's initials and the figure of Kokopelli, a Native American character symbolising the 'mischievous minstrel'.

But the most important weapon in the guitar's arsenal is its pickups and wiring. Eric worked with the Custom Shop to develop pickups that sounded both warm and hot, with a distinct vintage vibe that retained every ounce of tone possible.

Traditionally Strats don't have a tone control on the bridge pickup, leaving this often harsh-sounding single-coil as many people's least favourite selection. Johnson simply switched the tone pot from the middle pickup to the bridge, leaving the neck unit covered by its own tone control but the middle wired wide open.

The EJ's cellulose -acquered neck is a touch bigger than the average Vintage Reissue Strat, with a chunky 'C' meets 'V' feel that's designed to be a comfortable palm-full and bring an ounce or two more tone to the guitar.

"Again, this is taken from my favourite '57 Strat," says Eric. Like so many Fenders these days it's almost a work of art, its fingerboard's edges having received the 'rolling' treatment that leaves it feeling smooth as silk, and its slightly larger frets perfectly set, dressed and polished.

Maple fingerboards usually feel better with slightly heavier fretwire, as inevitably the frets are buried somewhat in the lacquer - even when it's as thin as stipulated by Johnson.

The slinkiness of its polished surface can also make bending a little too slippery with vintage-style 'fine' frets; whatever Eric's intentions in this regard, the result is playing perfection.

The lightness of the EJ is a revelation: you can play it for hours and hardly know it was there. Action is set dead right - low enough for comfort but with enough purchase under the strings for easy bending.

The cellulose finish is totally drag-free and it's one of those necks you can forget is there and just get on with playing.

These pickups echo Johnson's love of vintage Strats and so were voiced to reflect the kinds of sounds you hear on albums like Ah Via Musicom, Tones and his excellent new release, Bloom.

But it's not all hyper-fat lead; Eric also loves sparkling bridge, classic Texan neck and spanky middle pickup tones, as well as those 'vocal' sounds so ably served by positions two and four.

"I wanted them to sound like '50s pickups," explains Eric, "with the exception that the bridge was a bit brighter. These weren't copied from my guitar, but Michael Braun and I sought out magnets and copper wire close to the 1950s specs."

So while the resulting sonic palette is distinctly classic in timbre, there's super clarity on offer too. All these sounds are ideal for rhythm and riffs, sparkling clean leads and of course Johnson's legendary chord voicings layered with dreamy effects.

What Strat player hasn't wished that pesky bridge pickup could sometimes be tamed? Of course, on many Fenders this is now possible, but on something as vintage-vibed as this it's a rarity. Eric's shifting of the tone pot from the middle to the bridge pickup allows this - and by default the bridge-and-middle positions - to be adjusted.

And as both 'in-between' positions on the five-way are noise cancelling, this is as close to a genuine humbucking tone as you'll find on a Strat.

But that bridge pickup: knock back the tone by 35 per cent and it sounds like a Gibson SG - we kid you not!

What's best about it is that, when playing live, you can use those other positions for rhythm and flick instantly to either bridge or the bridge-middle combination and it's tantamount to jumping on a humbucker pedal! "All my Strats are wired this way," grins Johnson, "I've actually been doing it since the 1970s."