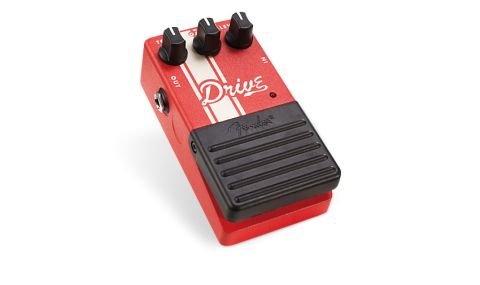 Mild but natural overdrive that can kick your amp up a notch.

Fender isn't really known for its effects pedals. Sure, there have been some in the past, such as the Blender fuzz, and there were a bunch of re-issues that we reviewed in 2008, but they were all one-offs and nothing like this new homogenous range.

Where previous Fender pedals have eaten up floor space, the Competition Series is 'board- friendly with a similar footprint to Boss compacts, and competitively priced - under £50 at many retailers.

The Drive has a standard array of tone, gain and level knobs with the tone knob starting out neutral sounding and then adding more top end presence as you turn it up, getting a little gnarly at the extreme.

This, combined with the fact that the pedal can deliver a decent amount of clean boost with the level up and gain knob down, means that you can use it as a treble boost if needed.

But it's overdriven tones that most will look for here and there are plenty of them: from just breaking up subtlety to a satisfying raunch. It's a range much like a Tube Screamer that's good for Stones rhythms and blues leads.

One would expect Fender to know a thing or two about drive sounds when some of the most coveted dirty vintage tones have been courtesy of small cranked Fender amps such as the Deluxe or Champ, and this pedal doesn't contradict that. As a purveyor of dirt by itself or as a means to drive your amp's front end, it succeeds admirably.