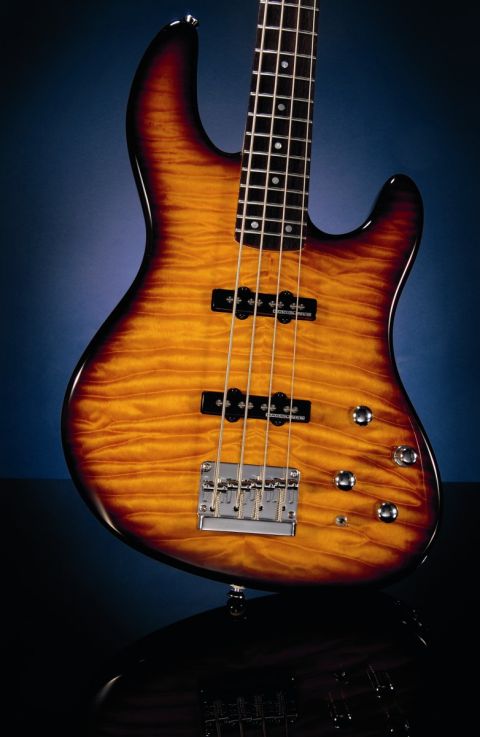 The Jazz 24 has an awful lot going for it when you add up all the changes and extra features. And while Fender is only producing what many other companies have been doing for some time, it has a very tidy, production-line price.

Many years ago, Fender produced what many players consider to be the ultimate bass guitar. However, it hasn't stopped tweaking its trusty Jazz, so much so that there's a relatively new generation of Jazz Basses that have abandoned the traditional look for a much more streamlined appearance.

Curiously, this design ethic was championed by other manufacturers and gave rise to the 'super-J' breed of basses.

Using a combination of exotic woods, high-quality components and powerful active electronics has allowed them to become pretty well established over the last 10 to 15 years, so some may view this as a bit of a pointless (and rather late) exercise.

However, many players await any developments on Fender gear with baited breath, and if you're one of these people then this bass could be something of an event. Thankfully, and true to form, the results aren't a disappointment.

Although there's little here that hasn't already been addressed by those would-be usurpers of the Jazz Bass crown, the very fact that this is made by the people who should have done it in the first place is bound to make it that much more attractive - and doubly so when it's offered at such an affordable price!

The extended and sleeker upper body horn offers improved balance and, along with the disposal of the scratchplate, presents a cleaner, more modern stance, allowing the flame top to shine through.

Many designers would have gone for gold-plated hardware to complement this natural look, but Fender has stuck with chrome and we actually prefer this. Things stay traditional as far as the adjustable bridge styling goes, but close inspection shows that it sensibly offers a choice of surface or through-body stringing.

The Seymour Duncan Basslines pickups also stay true to the established design. They use twin poles, but beneath the body surface they're supported by advanced active circuitry, coupled to the control array, to give the player a vast choice of tones and audio dynamics.

To help keep the surface controls to a minimum, a stack-knob has been employed. While we acknowledge the practicality of this, we can't help wishing it was smaller so it didn't protrude from the body so much.

This is actually a general gripe, but surely a 'top hat' profile with the lower knob offered as a thinner 'brim' could be developed to reduce this cumbersome double-height design.

In complete contrast, the licensed Hipshot tuners are extremely neat in their design, and while they retain the traditional 'shamrock' button appearance, they're much smaller than the conventional Fender tuners.

As a consequence, a reduction in headstock size has been made possible, and not only does this enhance the new, sleek look, but it also improves the overall balance.

At the rear of the body, a six-bolt neck plate takes over from the regular four-bolt fixing, and along with the control cavity and separate battery compartment, the back also houses the individual chrome-plated string anchors.

In stark contrast to the flame top, the finish here is the darkest hue of the sunburst, but it's still just about translucent. All in all, this is a very cool-looking bass…

Although this is Fender's first venture into the 24-fret realm, the general feel of the neck remains true to form. The nut width is about as slim as they get, and the satin polyurethane finish ensures that the neck has a really super-smooth feel.

Of course, there's absolutely no point in having a two-octave neck if you can't make full use of it, but there's no restriction here. Each and every fret falls comfortably under the fingers for an effortless playing experience confirming that this is a beautifully designed bass guitar.

The performance qualities are really good too, with some awesome possibilities from the myriad of tones to hand. And although there's definitely no sign of the age-old passive circuit thump, sonically, this bass still manages to shine in a number of ways, with sounds that are fully in keeping with the modern design.

In isolation, each pickup performs with superior quality and presence, and as they're so beautifully matched, only their positional placing on the body provides any individuality.

There's plenty of warmth and substance but also an effective edginess that ensures clean note definition over the increased fret range; mercifully, the top end never shows any sign of becoming brittle.

The Jazz Bass sound, however, has always been about the subtle blending of the two single-coil pickups and this is still very much the case here.

With only a master volume control provided, the pickup blending is handled by the pan pot, and although we would still prefer the individual volume controls that are traditionally associated with this model, you can still find those magic sweet-spot sounds where the bass suddenly leaps into life.

However, with this particular control configuration, backing off the master volume introduces something of a compressed effect, and rather than distracting from the sound, it actually provides even more possibilities for the instrument's tonal dynamics.

And just when you think you've assimilated the full tonal range available, you discover the mid-scoop switch and it opens up a whole lot more.

Mid-scoop is also known as the 'slapper's delight', owing to its ability to heighten the percussive element of your sound by boosting the highs and lows, as indeed the name suggests. With so much versatility of sound on hand, you really are spoilt for choice.