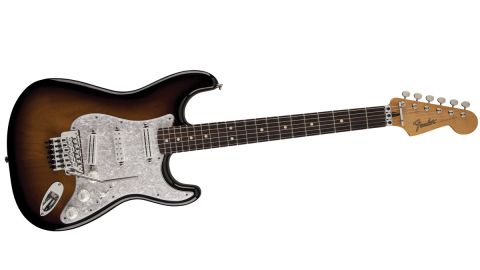 Definitely not just for Maiden fans; think of it as an all-rounder for rock, with a quietly eccentric retro-vibe belying its SuperStrat status.

Given that he plays lead guitar in Iron Maiden, the world's biggest heavy metal act, Dave Murray is a relatively unassuming chap.

His first affordable signature model is typical then, of a man happy to let the music do the talking; a signature graces the back of the headstock, but otherwise this is an instrument to impress your own personality upon.

Where Murray's 2009 US-built signature was inspired by his '57 Strat, this model draws upon his well-used 90s California Series for inspiration. It has a set of vintage tuners, a C-shape neck profile with a super-comfy compound radius fingerboard, and is augmenting by a tidy Original Floyd Rose double- locking vibrato to cater for Dave's more extravagant moments on the whammy bar. Built in Fender's Mexican facility, it'll set you back just over £700 and reward you in kind with pro-quality tone and feel that has a little more character than your average EMG-loaded, skinny-necked shred double-cut.

Indeed, Murray's Strat has an air of refinement; a sober, classy aesthetic complementing a nuanced, classic rock tone. It's a lightsaber in a market dominated by blasters. But make no mistake: with two Seymour Duncan Hot Rails stacked humbuckers in neck and bridge, and a JB Jr in the middle, there's plenty of firepower on offer.

When you play in Iron Maiden you need a guitar with guts. Seymour Duncan's Hot Rails for Strat humbuckers are one of the Californian company's highest- output models, and while they're certainly super-hot and punchy, there's a wealth of tone when seated in the Strat's alder body.

Given that Maiden's increasingly progressive sound makes all sorts of demands on Murray's gear, we're not surprised by the harmonically rich bark of the bridge 'bucker through an all-valve head, lending a fiery heat and squeal to solos.

That said, it also has some unexpected sweet spots when the signal is just pushed to breaking point. But the neck pickup is where much of Murray's DNA is found; that precise, bright, yet still slightly adenoidal tone is vintage Murray: all control and definition for fast articulate lead playing. Cleans are warm and airy, and having a JB Jr in the middle position is very much a secret weapon - all midrange bite and raunch.

Ultimately, the Dave Murray Stratocaster is one of the best options at this price for metal, with plenty of crunch and scream and a top quality vibrato, arguably trumping Murray's US-built signature model (retailing at more than twice the price) with regards functionality and versatility - if not outright quality.