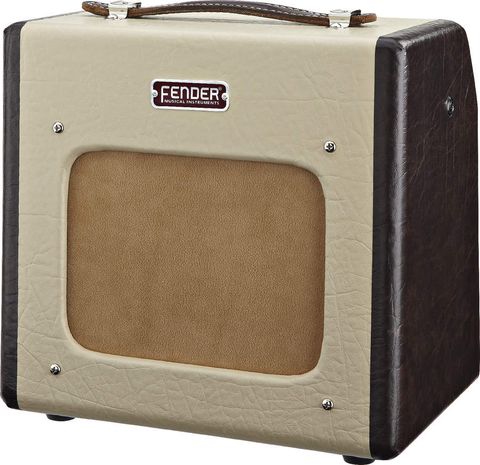 At this price, everyone should own one of these amps; it really is that good. A champion indeed.

The original Fender Champ 600, released initially in 1949, predates even the Esquire guitar, and this modern tribute apes the classic two-tone livery to perfection.

The sides are of brown vinyl with the remainder of the chassis covered in cream, and the material protecting the custom-designed six-inch speaker is of a lovely sandy-coloured faux horse skin.

Rated at just five watts RMS, the tone is warmed up with a modern higher gain circuit that drives single 12AX7 (replacing the original's 6SJ7) and 6V6 tubes, and the rear-facing control panel boasts a single volume pot that goes up to 12: Tufnel, eat your heart out.

A pair of inputs offers high- and low-gain options, plus there's the provision to link a bigger speaker too. A red jewel light tops everything off nicely.

The cabinet has a central rear port, which helps this small box and driver sound much bigger than you'd expect.

You can turn the amp all the way up for an authentic tube tone that's loud enough to drown out the neighbours' complaints.

The overdrive is subtle yet warm and the clean tones clear and sparkling, and putting a good boost in front gives even more possibilities with the level of bottom-end quite staggering for such a small amp.