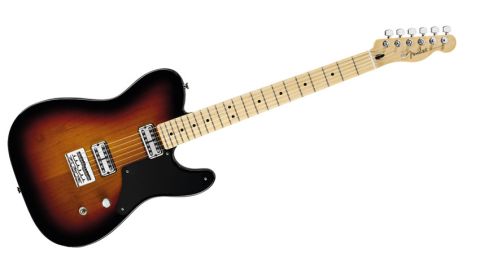 Spirited, endlessly playable and extremely difficult to put down, the Cabronita is a Fender unlike any other, and thankfully, one most of us can afford.

For most of us, getting together enough cash for a Fender Custom Shop guitar will only ever be a pipe dream. And that's a real kicker, because the instruments Fender's guitar gurus have been turning out as of late are braver and more desirable than ever before.

Take 2010's La Cabronita Especial Telecaster: a slab-bodied, stripped-down beauty with a pair of fiery pickups and one of the most radical departures in Tele design for years, it raised more than a few eyebrows.

Anyone who's picked up a Mexican-made Fender in the past couple of years knows that the quality of guitars being produced there is through the roof, and the Cabronita is no different.

In essence, it covers all the same bases as the Custom Shop original: a body of alder or ash, a pair of Gretsch-style Fideli'Tron pickups (replacing the original's TV Jones 'buckers), a trimmed scratchplate and a single volume control.

Of course, it's lacking all that Custom Shop relic'ing business, but let's face it, that's nothing that a few years' gigging won't fix, and trust us, you're going to be taking the Cabronita everywhere you go. This is an animal of a guitar, every inch the inheritor of the Telecaster's legendary flexibility and build quality, but with a roaring tone that's all its own.

Much of the Cabronita's distinct personality is down to that pair of Fideli'Tron pickups. We're all well versed in Telecaster twin single-coil tones, and you've probably played a humbucker-equipped Tele, but the Cabronita sounds like neither.

The Fideli'Trons have the feel of hot-rodded hellhounds, and have a startling impact. The bridge pickup takes the familiar Tele snarl and amps it up, a particularly tasty proposition when given a taste of drive. The neck position, meanwhile, has an impressive depth, which is especially effective when dishing out vintage rock, reverb'd twang and filthy funk.

Pairing those pickups with that chunky slab of tonewood, through-body string anchoring and hardtail bridge makes for a revelatory playing experience. The Cabronita has an animalistic quality, resonating so sweetly it feels like you're playing directly from the gut. With no distractions - a volume knob and pickup selector are all you get - this is a visceral guitar that channels the best the Custom Shop has to offer.

After all its years in production, and with so many models already out there, you'd have thought that there was nowhere left for the Tele to go. The Cabronita proves that there's plenty of fun still to be had with Leo Fender's first design, and that its boundaries are yet to be found.