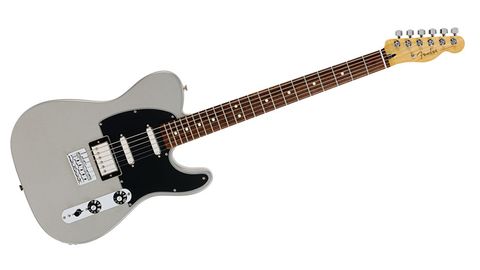 The Tele's no-nonsense nature combines with some neat design ideas to produce an effective baritone guitar.

Essentially halfway between a bass and a standard six-string, a baritone guitar is usually tuned down to A or B below normal pitch.

Fender's Blacktop Telecaster Baritone is a recent addition to the current crop occupying this niche market and, while its roots may be in Fender's first electric, it's not just for retro fans, especially in this Ghost Silver finish.

The typical Tele headstock carries contemporary tuners, but tuning is somewhat erratic, and accompanying creaks suggest the nut might need more work. The string guide doesn't help, lacking any spacer underneath and pulling the top two strings hard down to the headstock, which also makes them difficult to remove.

The bolt-on maple neck is longer to accommodate the extended 686mm (27-inch) scale, and although proportions are meatier all round, it manages to maintain a comfortable handful, with the gloss finish adding a vintage look and feel. The shallow radius 22-fret rosewood fingerboard is equally friendly on the fingers, helping to make light work of the extra reach and heavier strings.

The neck may have been stretched, but the alder body stays standard Tele in terms of shape and size. Weight is a fairly hefty 4kg, although waist contouring on the back lightens the familiar chunky lines.

The unusual three-pickup complement comprises Telecaster-type slim single coils in the neck and centre spots, both mounted on a suitably black scratchplate, with a matching, chrome-covered bridge humbucker.

The metal control plate is inverted, placing the five-way selector below the volume and tone pots. Fender says the pots are topped with black, amp-style knobs, but they're really more like those seen on some Fender and Gibson guitars in the 70s.

Volume-wise, it's typically rather polite, but engaging the bridge humbucker instantly increases output. While far from the toppiest of choices, this pickup packs plenty of midrange emphasis and edge for added muscle. It won't please those expecting Tele-type twang, but works well with gain-induced overdrive, making this more flexible than expected.

Pickup switching differs to the stated standard five selections, since the middle position actually provides all three on, not the central single coil only. This somewhat soft-sounding triple mix is tonally quite similar to the other coil combinations, especially so on a baritone, and a blend of front-plus-back would make a much more effective option.

All three of these switch settings have that typically hollow tonality, but none provide abundant treble (which would be useful to improve definition) nor are any of them hum-cancelling.

A pickup problem with the review sample meant a second had to be supplied, but this suffered from some finish flaws, plus a bridge installed askew, all of which suggests quality control could be more consistent - unusual for modern Fender. Despite these criticisms, this new Fender low-ender is a sturdy and classy looker of an instrument that offers a lot for the money.

Most baritone guitars can be described as either old-school or modern, with the former favoured for clean licks and lead lines, while the updated alternatives are usually best for dishing out densely distorted, detuned sounds made for metal, thrash or similarly heavy styles.

Some models manage to do both, and, contradicting its traditional body shape, Fender's Blacktop Telecaster Baritone has this ability, making it well worth consideration by anyone who is seeking a serious but affordable example of this specialised instrument.