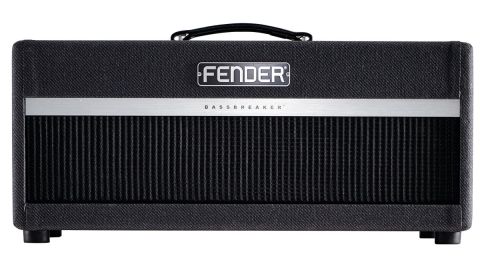 You can certainly hear the tweed heritage in this keenly-priced head.

Time never stands still, and with amps such as Fender's Blues Junior and DeVille now regarded as 'vintage' by many younger players, it's worth remembering that 2016 actually marks 70 years since the first Fender 'Woody' amps.

Fender has chosen to kick off the new year with a rare event: a brand new amplification range that takes some of its inspiration from classic British amps of the 1960s, which were in turn 'inspired' by classic Fender designs from the late 1950s, such as the infamous 5F6A Bassman and 5E3 tweed Deluxe.

Common to all Bassbreakers is a new style described as a "parallel evolution": solidply cabinets covered in dark grey tweed, black speaker grille with aluminium trim, a Fender 'block' logo, large pointer knobs and late 60s-influenced control-panel graphics. The amps are designed with the current trend for outboard pedals in mind and have some interesting boutique-inspired features, which vary on each model.

The chassis is similar for all of them: a hefty open-ended steel box made of two angle sections joined by small machine screws. The internals are PCB-based, with two main boards for preamp and power amp supporting all the front panel components and valve bases, joined bya lot of wires and ribbon cables.

While everything is densely packed in, the component and wiring standard is very good and our Bassbreakers certainly have the typical Fender vibe of style blended with tough reliability - first and foremost tools for working players.

One feature of the Bassman that found its way onto early Marshall designs was the two pairs of input jacks, which could be cross-linked with a small patch cord. With both volume controls active, players could mix the differently-voiced channels for further versatility, as well as benefitting from a little extra gain. The 45 has just one input jack per channel, but a third 'Both' input jack acts as an internal patch lead, allowing selection of either channel or both simultaneously.

The head fires up quietly, with no audible mains hum and very little hiss. We tried it with a selection of guitars, including a PAF-powered Les Paul Standard, an old Strat fitted with Duncan Alnico Pro II's and an Ibanez archtop.

Inspired by the tweed Bassman, the 45 is loud and aggressive, mostly thanks to the pair of EL34 output valves. The dual preamps can be linked by plugging into the 'Both' input jack, for the highest gain and widest tonal range, while the output level control can drop power to as little as one watt.

The 45 seems to work best with a big humbucking tone - the Les Paul is a perfect match for lower power overdriven settings, while the Strat works best with higher headroom and more clarity.

At those settings, you can come close to the woody thump of the plexi, while less output power equals more drive, pushing into JCM800 territory for screaming solos.

We've enjoyed Fender's Pawn Shop Special experiments, but it's brave of Fender to step so far out of its territory with a whole new range that doesn't use the traditional output valves found in most Fender circuits.

The EL84 is also in the Blues and Pro Juniors, of course, but we don't know of a Fender that was ever fitted with the EL34 as stock.

Aimed at players of all levels, from home recordist to weekend warrior to seasonedpro, this new range is built to stand up to professional use and quirky enough to appeal to boutique fans, as well as being in step with the current pedalboard trend.