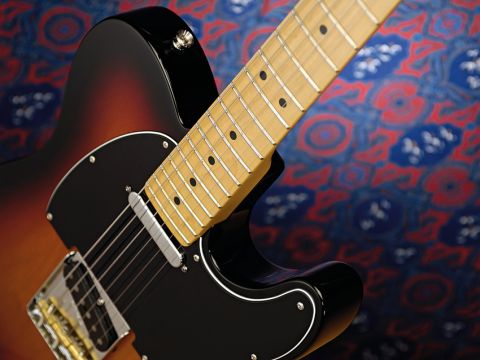 Aimed at the gap in the market between the American Standard and the Highway One ranges, these American Specials succeed with value and tone in abundance.

Fender's own take on Fender's new American Special line-up is that they are "value-conscious guitars for the times… designed specifically to bring the full Fender experience of a terrific-sounding, smooth-playing, rock-solid-built US-made guitar to the working man, without emptying his bank account." Well, if anyone can fulfil that promise, it's Fender.

The American Specials' colour range is very limited albeit tasteful, with the Tele available only in three-tone sunburst and Olympic white. Our Tele is sunburst and features the thin polyurethane finish that, unlike the matt look of the Highway One models, emanates a classy and upmarket vibe. In fact, at first, it's not easy to see where - and indeed if - any corners may have been cut.

You can't help feeling that Leo Fender really did get it right first time; so much so that the humble Tele has probably had more versions built around it than any other guitar alive. So what, if anything, is so 'special' about this Special?

Build-wise the American Special Tele is made from three-piece alder, perfectly coated in three-tone sunburst urethane and with an attractive light maple neck that's been treated with a slinky satin finish.
The 22 jumbo frets sit on a 9.5-inch radius 'board and tuners are Schallers, with a single string tree adorning the headstock.

Our Tele is certainly not an unwieldy beast. It's put together with an attention to detail that means it's impossible (discounting the three-piece body, which might bother some) to find a flaw in either construction or finish.

Not surprisingly, we find a traditional bridge with three brass saddles and the use of a twin-pickup layout. Texas Specials are the choice, the rear coil retaining the black 'open' bobbin look and the neck single-coil with a shiny chrome cover for a look that's marked out this model for an astonishing 60 years.

What's slightly different to many Teles is that our neck pickup has two adjustment screws that allow you to set its height with much less fuss than on Teles of yore; and Fender has also chosen a black laminated scratchplate that goes rather well against the body's three-tone glow.

The Special adopts the now standard 'post-1967' control configuration of single master volume and tone pots governed by a three-way lever switch. It also features Fender's Greasebucket tone circuit. Everything about the guitar smacks of function over form; indeed it could well adopt Rory Gallagher's mantra of 'let's go to work' as its own.

The Tele's fuss-free nature reveals itself when you pick it up to play; there's little fightback from the flat 'board and big frets. It's a 'buttery' playing experience whether you go for country bends (the Tele's perceived home territory) or bluesy slurs and rock-style finger vibrato. In fact, it's so easy that you simply get on with the job in hand and forget about everything else.

The word that sums up our Tele's overall tone is 'clarity', but there's a definite 'snarl' here. The bridge pickup is as bright as you'd expect when played clean, but as with all good Teles, seems to darken as the gain increases.

The Greasebucket circuit means that turning down the tone smooths things off without turning it into a woolly mess, and when lots of gain is added we definitely enter Gibson's sonic territory.

Switching to the neck pickup, clarity still rules, but obviously with more inherent warmth. It's great for Hendrixy fills and Gilmour-like leads, while taming the tone slightly makes for some delightfully rich jazzy tones.

As you'd expect, middle position is 'twang city', but again, back off some tone, pile on a bit of drive and in effect you have 'Crossroads Light'.

So, the American Special slots in under the long-running American Standard range - for many, Fender's staple Tele. The more recent, matt-finished Highway One series also fills a spot in the market between the more affordable Mexican-made guitars and the upmarket American Standard and Vintage series, but lots of people want their guitars shiny, not matt.

These American Specials take some of the best features of all the above, add a neat new twist here and there, and come up with a sparsely populated line that should instantly appeal to Fender-heads who don't have bottomless wallets, but who feel they too deserve full-on American quality - and gloss - at streetwise prices.

If you're in the market for a Tele, then you'd have to spend an awful lot more money to find something significantly better than this. Once again Fender has focused its sights, aimed at the target and hit bullseye with its first shot. We'd like to see a more adventurous colour palette and better gigbag (or form-fit case), but otherwise we can't fault the guitar at this price point.