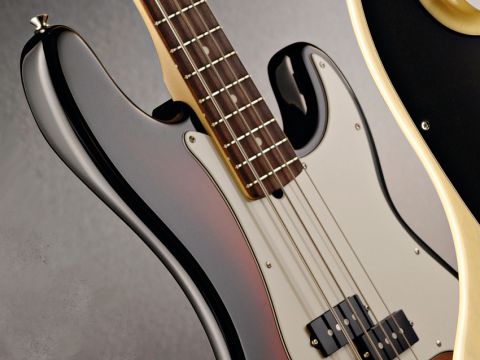 This is a seriously good Precision with the right feel, right looks and right sounds. The legend, upheld.

Any bass player worth their salt has played a Fender Precision at some point and, whether it was just a fleeting try-out in a music shop, or something tantamount to a lifelong love affair, one thing's for certain - it will have left a lasting impression.

No instrument is to everybody's taste, of course, but the Fender Precision is where the solidbody electric bass guitar as we know it began its life, so it has a relevance to every other model produced since the dawn of the '50s, be it a direct clone, or something trying to be wildly different.

Fender has continued the tradition rather well, but after 60 years in production what can it possibly do to the trusty P-Bass that will have the power to fire the imagination of new bass players, as well as pull at the heart-strings of the hardened anchor man?

Well, one thing is certain: Fender's design team is never short of a few ideas…

As the latest incarnation in the ever-changing world of the Precision, the American Special quite rightly looks every bit like a regular P-Bass should.

It presents a new slim profile, sophisticated model that oozes class and looks right at home in today's bass market. As such it features a fully contoured body, however, with a high gloss finish to the fully contoured body and shallow 'C'-shaped neck.

With its satin finish and a rosewood fingerboard, the neck is fixed to the body in traditional style with four screws and neck plate. The body sports a white/black/white three-ply scratchplate with a cut-out for access to the truss rod adjustment at the body end.

The traditional split-coil pickup offers vintage-style Alnico magnets and features a Greasebucket tone circuit that, according to Fender, "rolls off highs without adding bass".

Available in a variety of finishes including this glorious three-tone sunburst, it remains a great looking bass and is particularly good to play.

Traditionally sunburst basses had tortoiseshell scratchplates, but the choice of white here gives it a fresh, modern look.

One major change that was implemented throughout the range some years back is the introduction of a thicker headstock.

This definitely makes sense when it comes to both sound quality and roadworthiness but, to be honest, many still prefer the earlier, somewhat thinner version. But this isn't a major issue, it's just a matter of personal preference.

Fully rolled off (anti- clockwise) there's a clearer, funkier element than you'd normally associate with a P-Bass. At the other extreme (full treble) there's a bright but solid delivery.

By gradually easing back the tone control that funky element stays pretty much in place no matter where the control is set.

Curiously, about two fifths down from full treble there's almost a sweet spot, usually associated with dual-pickup basses such as the Fender Jazz; it's as if the split- coil element takes over and a blending occurs between the bottom two strings and the top two. It's a subtle effect, but a cool one nonetheless.

So, the Greasebucket circuit does what it says on the tin and has something effective to say. It's not vastly different from the standard passive circuit but then this is a Precision and it should sound like one, which it certainly does: loud and distinctly solid, a feature that rock players in particular will find very attractive.

For our money this neck profile has to be one of the very best on any Precision since day one! Forget authenticity, or those classic early versions, this neck shape is excellent.

We would prefer a thinner headstock, but this is all very much a personal thing and should not influence a decision to buy this thoroughly professional bass guitar.