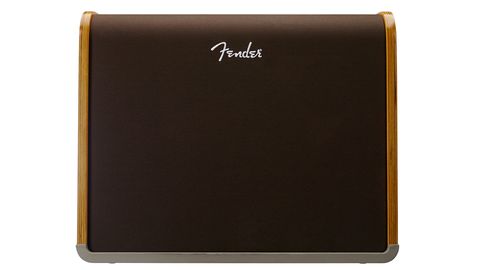 This Fender should meet the needs of anyone playing small-venue gigs, while doubling as a personal monitor on larger stages when you need it to.

As we previously reported Fender's acoustic march is well underway in terms of mainly affordable instruments that might not pack a huge amount of Fender DNA but certainly provide excellent value.

The current Acoustisonic amp range provides the necessary 'backline', but for 2016 it's been augmented with a more stylish duo topped with this 200-watt Acoustic Pro that - aside from the classic logo, sewn into the brown material front covering - looks like a piece of modernist furniture.

Indeed, the back and sides are made from a thick maple multi-laminate with grey rubbery plastic base and a clean top-panel control layout fronted with a rubberised grab handle (which also provides a neat tray for your mp3 player or tablet).

Thanks to the neodymium 12-inch woofer, weight is kept to a minimal 12kg - it's an easy one-hand lift - and includes a pretty rugged cloth cover to keep it shipshape. You even get a metal tilt-back kick-stand that flips out from the base to slightly angle the combo's projection upwards. All good.

That top panel is very clean and minimalist: the two channels are mirrored left and right, with the same controls and XLR/jack combi inputs. It's pretty standard stuff with three-band EQ (with sweepable midrange), volume, reverb and a phase switch for primary feedback rejection.

It's not over-spec'd: there's no control for overall volume level, which could be helpful to crank the output as your gig gets nosier, for example.

The simplicity of the input channels shouldn't baffle anyone. Unlike some acoustic amplifiers, this is more akin to an old-school hi-fi.

The EQ is broad, with treble and bass being the general tailoring tools, while the wide midrange sweep and level allow you to dial in on any unwanted frequencies. You may need to use this in combination with any outboard EQ (or indeed on-guitar EQ) you have.

Quite often, both an upper mid and lower mid cut are necessary and there does seem to be a very slight lower-mid 'cloud' to the output here, either from a steel string or a music player.

The reverb type isn't specified and, with a little EQ added, it's quite rich sounding. However, as before, when you increase the amount, there's noticeable modulation that's hardly natural.

So, less is more and less is perfectly good for a little ambience. A major omission in the design would seem to be any kind of input 'peak' indicator, which seems a little odd, bearing in mind the quite diverse range of onboard acoustic pickup systems, not to mention the very fast attack of most under-saddle systems.

Conversely, trying a variety of steel and nylon strings, the latter given some hefty Spanish rasgueados, we couldn't get it to clip or distort. The downside of that may well be the reason that there's a little too much hiss, which is accentuated by boosted treble EQ. And speaking of omissions, channel-mute buttons are always handy if you have to swap guitars during your gig.

Sonically, it's certainly pleasantly room- filling with, seemingly, a wide, less-direct sound than our reference AER, for example.

Tonally, it avoids being overly 'hi-fi' in character, although some control of the tweeter, or at least high-end presence, would have been nice, especially if you are perhaps using both steel and nylon strings, or indeed an archtop or semi for those jazz gigs. As ever, the better the sound you put in, the better the output and direct in.

With no outboard EQ, we had little to complain about, with a seemingly 'all round' response that would suit all but the pickiest players - who may need to lose a little lower midrange and perhaps tweak the ultra high end, especially if you play with your fingernails. However, using our stage pedalboard with its own more specific EQ was a doddle, and we could simply EQ the amp to sound 'right'.

There's a lot to like about this combo: from its overall style to the neat mobile device 'tray', or indeed its light weight and generous output. In theory, things like the lack of an input peak indicator should be a minus in an amp of this nature, but in use, its omission didn't bother us at all.

The advantage of the Acoustic Pro's straightforward user interface is that it's dead easy to set up, with the welcome facility to make use of your outboard effects via the effects loop.