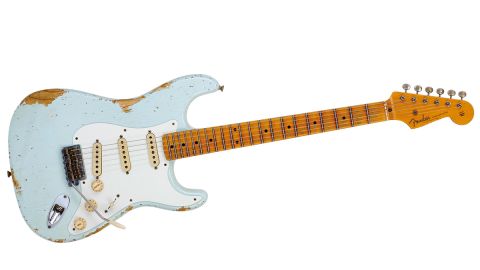 There's little not to like here. If you're a Strat fan in the market for something a bit special, hand on heart, we couldn't point you in a better direction.

The artificial ageing of guitars divides opinion between those who get it, and others who think those souls that do are deluded fools.

Well, we love both shiny new, heavily worn and all points in between and - luckily for everyone - Fender does, too.

So, here we have two levels of Relic'ing - there are five in total, from 'hidden under the bed all its life' to 'worked half to death' and all points in between.

Up for review we have a Limited Edition, heavily worn Strat that debuted at Winter NAMM in January.

Sonic Blue: it's one of those colours that you either love - or you probably love! It's got that 'ice blue jeans', mega-cool rock 'n' roll 50s vibe written all over it. That said, a good portion of this Strat's nitro finish has been removed in an effort to evoke 60 years of hard graft, revealing a finely figured lump of ash (well, two actually, although we can't discern any join) lurking beneath.

The body has been shaped with the classic deep belly cut and forearm chamfer of early Strats, while the edge radii blend seamlessly into top and back surfaces.

On the mild V-shape neck - the rear playing area of which is all but devoid of finish - the maple is elegantly shaped where it fairs into the headstock, leaving an attractive 'point' as the different surfaces collide.

Artificial wear reveals a player who favoured the top three strings and the fingerboard's lower reaches, venturing to the dusty end for occasional forays, usually in the key of A.

Of course, this mythical player is exactly that, but these days, Fender achieves wear and tear with great panache. In fact, you'd be hard pressed to tell that 1,000 gigs weren't the culprit, and not the talent and abrasive tools of a Fender craftsperson. Hardware is chrome, appropriately dulled and rusted in all the right places.

Electronics-wise, our Strat features a trio of hand-wound Custom Shop Relic pickups and the usual array of controls, with the exception that the bridge single coil has its own tone pot. This is the most sensible of all Stratocaster mods as it tames the slanted pickup's sometimes-vicious top end; we feel it should be standard on all Strats.

The Strat's lightly V-shaped neck feels like a more slender handful than it actually is. The lack of timber mass on its shoulders lends an airiness that belies its depth, which comes in at just under an inch at the 12th fret and a little less at the 1st.

This, combined with larger 6105 frets on the flatter 'board, provides a satisfying mix of comfort and fightback - the .010-gauge strings, as fitted, offering perfect weight and balance for bends and vibrato.

Sound-wise, you get exactly what you expect from this instrument. With its tone pots wide open, the hand-wound pickups of the Strat are spanky and evocative. Neck position is pure SRV, while the in-between tones - courtesy of a RWRP middle pickup - provide vowel-y Knopfler voices devoid of hum.

Flipping to the bridge and experimenting with its tone control reveals a range of sounds from super-bright Eric Johnson-style chordal chime, to his acclaimed 'violin' tone with a ladling of fuzz and the pot backed right off.

But here's the rub: the Strat's Limited Edition status kicks it over the £3,000 mark, although realistically, this should be a few hundred less at the checkout. Whichever way, it won't deter the army of fans who will flock to buy one.