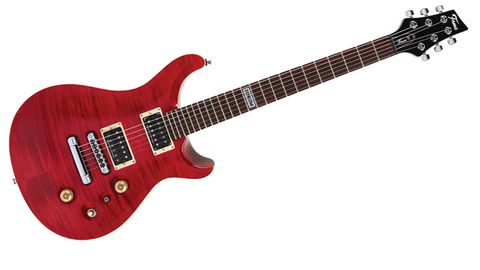 It might be one of the least original instruments we've looked at for some time, but you can't knock the craft or quality.

Just entering its 30th Anniversary year, PRS is quite unique in that, compared with Fender and there are relatively few copies or clones of the Maryland-based brand's guitars. Good ol' Vintage here in the UK offers a naughty tribute, and this Fame needs little explanation as a heavily inspired - inspired being an understatement - version of PRS's classic Custom 24. But who the hell is Fame?

Prog metal fans will probably be familiar with Mayones guitars: made in Gdansk, Poland, and used by the likes of Misha Mansoor. Well, Fame guitars are made in the same factory as Mayones, for German retailer Music Store.

Okay, so if that's the background, we're looking at a very tidily made instrument, with a spec that includes Schaller hardware, Seymour Duncan humbuckers plus an active piezo pickup system. Aside from these bells and whistles, however, the guitar is rather good.

Yes, it closely apes the Custom in terms of shape but, although the top carve is a lot flatter than the real thing, the vibrant colour and reasonable figuring of the top certainly look the part, complete with PRS knock-off natural edge 'binding'. Like PRS, there's a deep scoop in the treble cutaway and a larger-than-PRS belly cut on the back.

Shorter in scale than the standard 635mm (25-inch) PRS Custom, the Forum at least doesn't feature bird inlays: just a rather industrial 12th fret inlay. But the slightly flatter-than-PRS radius 'board (closer to 381mm/15 inches) is well fretted, and the neck shape leans towards PRS's old Wide Thin shape: slim-depth'd but still quite mainstream and perfectly fit for the job.

Our review model's original setup is rather low, but easy to raise via the tune-o-matic bridge. That sorted, the guitar has an encouraging acoustic response and ring.

Amp'd, both humbuckers sit easily in the classic blues/rock camp, although the JB makes a great classic metal pickup with focused midrange clout and a crisp high-end.

It's a little strident sounding, perhaps, lacking the depth and resonance of the real thing, but as we've said, this is a long way off in terms of price.

In fact, along with a perfectly usable acoustic-like voice, certainly good enough for rock acoustic-like flourishes, the Forum is a cracking lil' guitar.

Sitting between PRS's SE Custom 24 and the higher priced S2 Custom 24 versions, this Fame guitar might be one of the least original instruments we've looked at for some time - but you can't knock the craft or quality.

If only Fame had put those skills into something more original, then Europe would have had a serious brand on its hands. To most, however, it will be seen as a 'PRS' with the wrong name on the headstock - a great guitar, but a missed opportunity.