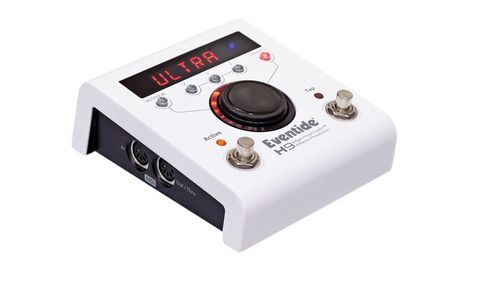 A 'multi-effect' that's upgradeable, compact and has iOS control. Superb!

Objects of many a guitarist's desire, Eventide's stompboxes the ModFactor, PitchFactor, TimeFactor and Space respectively focus on modulation, pitch, delay and reverb effects. The not-inexpensive pedals are large with loads of knobs and, by their very nature, specialised.

If you were really interested in getting deep into any of those particular effects genres, one of the pedals could be a sound investment, but for many of us, a smaller, easily operated pedal featuring a range of Eventide effects across the four genres would present a more practical option. The H9 offers just that...

Here is a pedal that can actually run all of Eventide's stompbox effects (apart from the TimeFactor's Looper). All of the effect algorithms (including their associated presets) are available for purchase at £13.99 a shot, but several come already built in - you get Chorus and Tremolo/Pan from the ModFactor, H910/H949 and Crystals from the PitchFactor, Tape Echo and Vintage Delay from the TimeFactor, and Shimmer and Hall from Space. In addition, there's a new UltraTap Delay that's exclusive to the H9, plus a voucher for a free algorithm of your choice.

The H9 contains 99 presets based on the available algorithms and these are easily called up via a combination of footswitch presses or the large data encoder. After the excessive knobbage of the other Eventide pedals, the H9's interface has been kept impressively simple with just five buttons and the encoder.

Three of the buttons (X, Y and Z) allow quick onstage tweaks of the top three parameters of any preset, while the Hotknob button is an instant alternative to plugging an expression pedal into the rear panel socket - each preset's character can be altered by either.

The complex effects algorithms feature loads of editable parameters. The H9 has both wireless (Bluetooth) and wired (USB) connections for the free H9 Control editor and librarian software (iOS app, Mac, Windows) for editing, creating and managing presets, changing system settings and purchasing algorithms. This pedal has been designed to take full advantage of this and it works brilliantly, especially so on an iPad where a few finger swipes zap the pedal through thin air to produce instant results.

With stereo or mono operation available, the H9 offers plenty of connection options and the included effects cover a useful range that could be enough for many users without having to buy any more algorithms. Of course, the great thing is that you can buy just the ones that you want, so if you liked the BlackHole sound from the Space but didn't want to spring for the whole unit, now's your chance...

Eventide effects are derived from a long line of studio processors, they're detailed and classy and can head off in sonic directions lesser processors can only dream of. Other one-effect-at-a-time 'chameleon' pedals exist out there, but the H9 pushes the genre's envelope.

It was never going to be cheap but it's the right pedal for your 'board if you want to add a wide-ranging sprinkling of Eventide fairy dust to your sound.