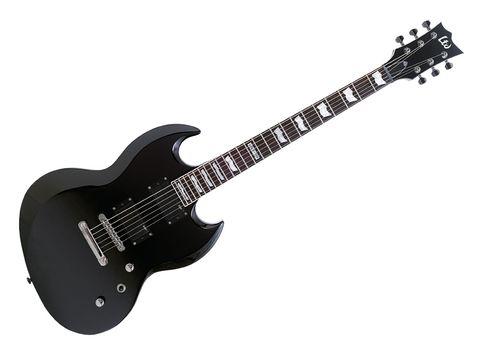 With a sleek neck and dark looks, it's just the sonic performance that needs work.

Like most mainstream guitar companies, ESP constantly strives to identify gaps in both the market as a whole and within its own catalogue; after all, where there's opportunity, there's the chance to make a nice wedge.

Thanks to the endorsement of a number of A-list metal bands, not least Metallica, Slayer and Children Of Bodom, the vibe of many ESP and the firm's lower priced LTD guitars is intertwined with the dark art of high-octane rock - boasting active pickups, fast necks and a sturdy construction.

This shiny new Indonesian-made LTD 330 Series subscribes wholeheartedly to the ideal. Aimed at players who are meagre of pocket but flush with ambition, it fits snugly between the cheaper end of the catalogue and those models suited to semi-pro players with a bigger budget. Each of the five incumbents feature a bolt-on neck, just one choice of finish per model and come loaded with the new ESP-branded active ALH-200 pickups.

"The new ALH-200 set features ceramic bar magnets to cover any string spacing and to give plenty of punch along with the moderate output coil windings," ESP tells us. "Although active, we wanted to keep more of an organic sound, so players will notice that our pickups do offer a moderate amount of gain, and we feel that players can actually use our active pickups with their existing amps and not feel like they are completely changing their sound."

This all-black, SG-esque Viper is pure Tony Iommi and it doesn't get much more metal than that.

Strapped on it's slightly less neck-heavy than an SG, as the mahogany body is reassuringly weighty, while the offset horns are a nicely modern twist.

The control panel adds a master tone alongside a volume and three-way toggle, and the rosewood 'board's white binding has been uniformly and nicely scraped back between the frets. Its feel, although wide, is more akin to that of a Gibson Les Paul Classic in as much as the perceived breadth is counteracted by a smooth 'U' profile and, when strummed acoustically, the inherent resonance promises good things to come.

Again, starting with a high-gain tone, the Viper is immediately fuller sounding than the M-330 we tested perhaps owing to the hard tail and all-mahogany construction, but that's not to say that the exaggerated middly character has been dispensed with.

Muted riffs tend to be a little too flat with poor string separation, and the treble can be overly abrasive in too non-musical a manner. That said, the tone control is adept at smoothing some of the edges when required.

Where the Viper has more success is with classic rock, and John Sykes-esque riffs - all pinched harmonics and huge chords - are convincing enough. Frustratingly, the strident high-end prevents us from nailing that lovely AC/DC rhythm sound, but clean, funky strums benefit from the bite, especially when using both pickups together.