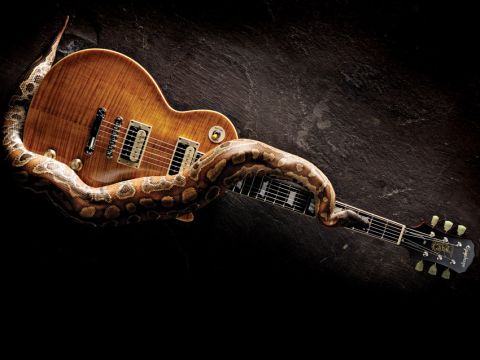 This Slash Epi sets the bar for all signature models, subtly different from the Les Paul template and a joy to play.

For the benefit of readers who have spent the last half-century under house arrest, here is a summary of rock 'n' roll culture.

This is a Les Paul: the hardest-rocking electric guitar in history. It's played by Slash: a chain-smoking gentleman in a top hat, whose legs-apart, heart-in-fingers fretwork has been the soundtrack to our souls since 1987's Appetite For Destruction.

Unless you're literally insane, you'll want to own the former and be the latter - and that's where the new Epiphone Appetite guitar comes in, supplying (most of) the features from Slash's very own Gibson Les Paul at a (relatively) thrifty £699.

On the face of it, your average, grizzled, 50-something gear veteran might be forgiven for stifling a yawn when going over the Appetite. Come on: it's a Les Paul. There's mahogany. There's maple. There's twin humbuckers and 22 frets.

Granted, in this case, there's also an alcoholic-looking 'Appetite Amber' paint job and assorted trimmings (picks, signed certificate, etc), but that in itself may not prompt you to burn down to your dealer, especially as the web price on a stock Epi Les Paul is often around £350.

So we need a USP - and we get it when we start fretting. Turns out this LP has a chunky, Slash-specified D-profile, and while its flat back won't be to everyone's taste, to these hands it's really manageable and gives excellent purchase and support for the kind of loose, bend-heavy, vibrato-drenched individual-note style you're likely to be shooting for as a Slash fanatic.

While the tonewood format of mahogany body and maple cap is Les Paul protocol, there's a subtle tonal departure here thanks to the Seymour Duncan 'Slash' Alnico II humbuckers.

Every position is a joy: the buttery, bell-like warmth of the Rhythm setting, the hot bite of the bridge, the pugnacious punch when you park the selector in the middle. We can genuinely say it sounds killer when played sans reverb or distortion.

That said, there are few tones more thrilling than the bad-tempered bark of those pickups when you ride the gain. We gave these babies five stars when we reviewed them in aftermarket form, and we're sticking to our guns here.

Luthiers take note: this is how you make a killer signature model. Sure, you've got the cosmetic fluff (the finish, the headstock scrawl, the free picks) to keep the fans happy.

Arguably more important, you also have a fistful of structural idiosyncrasies specified by the man in the hat himself, meaning that while this model hardly shreds the Les Paul blueprint, it does sound and handle a little different to your standard Epi, and makes you feel you've made the right decision shelling out a few extra sheets.

The only fly in the ointment is the limited run of 3,000, but as for your decision - it's so easy.