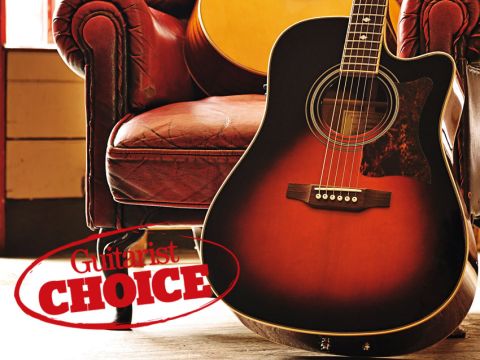 Epiphone has managed to produce a modern electro that still captures the essence of a vintage instrument.

Few guitar brands evoke old-world images like Epiphone. The Epiphone story started late in the 19th century when a luthier and violin maker named Anastasios Stathopoulo, the son of a Greek timber merchant, moved his family to New York in search of a better life.

The 'House of Stathopoulo' was opened in 1873 producing lutes, violins and other instruments. In 1910 Anastasios drafted his 17-year-old son, Epaminodas (also known as 'Epi') into the company. The instruments produced from thereon took the son's name and Epiphone began its road to worldwide success and notoriety.

Internal problems in the mid-1940s led to financial problems for the company, which by this time was losing ground to the likes of Martin, Rickenbacker, Fender and Gibson. A brief phone call from Epiphone's owner, Orphie Stathopoulo (younger brother of Epi) to Gibson's general manager, Ted McCarty, led to Gibson taking control of Epiphone in May 1957 for $20,000.

Under new ownership, existing product lines were relaunched while budget-conscious versions of Gibson products were introduced to the range. The formula was a winning one and with the help of Messrs McCartney and Lennon, who were users of Epiphones during The Beatles' early years, Epi took on the world.

Famously, the world's most played, heard and covered song ever, Yesterday, was written and recorded using an Epiphone 64 Texan.

Further consolidating Epiphone's acoustic credentials, McCartney authorised the release of the Paul McCartney 1964 USA Texan in 2005, a limited run, identical slope-shouldered dreadnought. It's reported that McCartney genuinely couldn't tell the difference between the limited editions and his own guitar.

With this model, Epiphone is seeking to offer vintage-style models with traditional appointments. Sitting alongside the Texan, the Masterbilt is a vintage-styled dreadnought cutaway but fitted with some high-tech onboard electronics. Something for everyone then?

Out of the box, this exudes style with smooth lines, sweeping contours and tasteful appointments. The name is a bit of a mouthful, but there's logic to it. DR denotes dreadnought shape, 500 refers to the level of features, M is for Masterbilt, CE for cutaway electro and VS for vintage sunburst.

The solid Sitka spruce top bears an excellent high-gloss vintage sunburst finish, which is edged with six-ply binding. The guitar's back and sides are made from solid mahogany, boasting a straight, tight grain.

The one-piece mahogany neck is fixed using a compound dovetail joint, a traditional technique used in high-end luthiery. The neck is carved to a slim 'D' profile that, due to its ultra-smooth satin finish, results in a super-quick neck.

The frets aren't jumbo in size but they're certainly taller than regular mediums. This helps with note formation and single-note speed playing. The rosewood fingerboard has a traditional 356mm (14-inch) radius and it certainly sings loud and clear on every one of its 126 fretted notes.

Physically, it's similar to the large-bodied, slim-waisted, square-shouldered Gibson J-45. Our DR-500 updates the design a little and adds a smooth, rounded cutaway for improved upper-fret access.

The detailing on the DR-500 is beautifully executed without being over the top. Mother-of-pearl split-diamond inlays serve as attractive fretboard markers and three coach-lined concentric rings make for an elegant soundhole rosette.

The tortoiseshell pickguard follows the lines of the rosette, the cutaway bout and the waist. Our favourite piece of ornamentation is hidden away on the guitar's back: a delicate strip of centre parquetry that divides the two-piece mahogany back and is a real touch of traditional elegance.

Onboard electronics come in the form of the new eSonic2 pickup and preamp system. Developed in conjunction with Shadow, the eSonic2 has two pickups: a slim-line magnetic NanoMag positioned at the end of the neck and an under-saddle piezo NanoFlex.

The latter picks up the oscillations of the soundboard as well as the string vibration to get closer to the true acoustic sound of the guitar. The two signals can be blended using the slider on the control panel.

Two output jacks offer the choice of either mono (blended) or stereo output (splits the two pickups). The stereo option creates an almost panoramic sound effect by adding delay or chorus to the second channel.

Other features include a built-in tuner (which mutes the output when engaged), a feedback filter, master volume and EQ knobs for each pickup. If the guitar looks traditional, its electronics aren't. The control panel is excellent: compact without being fiddly, clear and modern-looking.

Epiphone has produced a great looking guitar and we've no complaints in terms of finish or presentation here.

The DR-500 has a unique sound. The lower mid-range is pronounced and makes for a rich output. First position chords carry a strength and fullness without being blunt or harsh. The overall timbre is quite dry and woody.

While not being the loudest £450 dread you'll play, the DR-500 certainly has plenty of sustain. As you'd expect, strumming is where this guitar excels and the narrow string spacing helps give a balanced tone. The DR-500 produces excellent note separation and clarity and, with a heavy pick, is ideal for some country-style flatpicking.

Unplugged, it's a capable and responsive performer. Plugging in is equally rewarding. The blendable preamp is its ace card. In truth, the EQ knobs do no more than a standard tone control. Yes, there's some variation in EQ but we found the best results from leaving the controls at the centre indent and sweeping the blend.

With a bias to the NanoMag (neck) pickup, the eSonic2 offers a very likeable warm and mellow output, which then becomes drier with more punch as the blend slides towards the NanoFlex pickup. When sliding it fully to the NanoFlex, however, the output drops off and the slider needs to be nudged back to restore the output.

That aside, the range of tones offered is very good and most tone-conscious gigging or recording acoustic guitarists would be well catered for here. However, the overall output does seem a little on the low side - we had to push the amp harder compared to other similarly priced electro dreads.

Epiphone, as ever, has produced a great vintage-looking guitar that benefits from a little modern technology. It might not be the most flexible guitar on the market, but what it does, it does well. The DR-500, with its solid back and sides and Shadow NanoMag system, is excellent value for money. What's not to like?

Now listen to our full audio demo to hear the DR-500 in action: