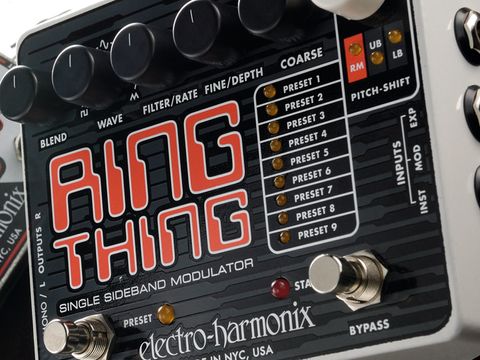 This is a very versatile sound creation tool you never knew you needed.

Always prolific, it was perhaps a surprise to some that Electro-Harmonix only launched two new effects pedals at this year's NAMM show. But those two are landmark additions to the range, combining 21st century features with the vintage sounds of earlier pedals.

The Ring Thing is a "single sideband modulator" and provides ring modulation (adding new features to the original Frequency Analyzer) while also throwing pitch shifting into the stew.

Ring modulation isn't exactly a mainstream effect in guitar culture. With its droning metallic timbres it's one of those sounds that polarises opinion - often being thought of as unmusical.

What Electro-Harmonix has done with the Ring Thing, however, is to provide ring modulation, but also use it as the basis of a new, more harmonious effect that E-HX calls single sideband modulation, which uses just one band as opposed to standard ring mod's two together.

In addition to this, the Ring Thing has a pitch shifter that Electro-Harmonix says is capable of transposition, detuning, chorus and vibrato.

Four modes are selectable by pressing a white rotary switch - choose from ring modulation, single sideband (upper band, single sideband), lower band or pitch shift. The switch can also call up one of nine onboard programmable presets, made active by a press of the preset/tune footswitch, which can also be used to scroll through the presets.

Holding down the footswitch also allows the Ring Thing to automatically tune its internal modulator to any single note you play on your guitar. Six knobs enable you to adjust the parameters, the function of each knob (apart from wet/dry blend) varying depending upon which mode you're in.

The standard ring modulation effect will give you all the dissonant and bell-like timbres that you need - either transforming your guitar sound or just adding a metallic edge.

The single sideband sounds can be a little more musical in colouring the sound and you can dial in a very useful range of tremolo, vibrato and rotary speaker-like sounds in those modes with careful setting of the controls.

In pitch shift mode you get all notes shifted up or down by the same amount to a maximum of +/- two octaves.

The pedal does the standard sub-octave thing very well with really good note-tracking and that goes for any fixed harmony. If you're into Whammy-style pitch-bending effects, plugging in an expression pedal will do the business - it's especially effective when set to an octave up. Finally, there's plenty of weirdness on tap by turning up the filter/rate knob, selecting a waveform and modulating your pitch shifting.

Listen through to our audio samples to hear a few examples of what the Ring Thing can do: