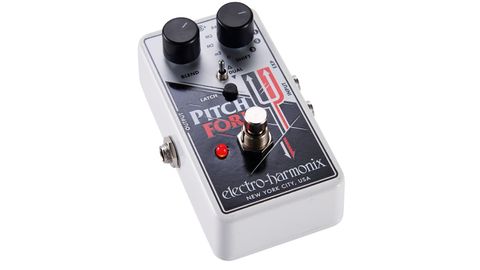 EHX has knocked it out of the park with the Pitch Fork: the tonal potential from such a tiny box is damn near overwhelming.

Pitch shifting has come a long way. Back in the 80s, if you wanted quality octaves or harmonisation, you were looking at investing in a bulky - and costly - rack unit, not to mention whiling away a day or two studying its accompanying manual.

But with the advent of the DigiTech Whammy in the 90s, the easy-to-use pedal floodgates were blown wide open, eventually culminating in polyphonic shifting, courtesy of Electro-Harmonix's POG. Now, EHX has set out to cram all its pitch-shifting knowhow into one Nano-enclosured dreambox.

The Pitch Fork has a staggering amount of potential, so we'll start with the basics: you get all intervals between one octave up or down, plus two and three octaves either way, adjusted via the shift control, while the blend knob balances the shifted sound with your signal. The lil' toggle switch in the middle, meanwhile, adjusts between up, down and dual shifts.

Right across its interval range, the Pitch Fork's tracking is damn-near infallible. It'll handle whatever finger-twisting chords you throw at it, even on dual- harmony mode. There are some seriously useful sounds to be had, too, from the tasty detuned chorus modes up to the two octave up plus one octave down flute-y synth impressions.

Admittedly, there are some modes you're unlikely to use outside of torture and/or comedic purposes (we're looking at you, three octaves up), but you're certainly not short on options.

Let's not forget that with the blend all the way up and the pitch set down, you get instant drop tunings, too. There's a little - and we mean a little - more latency than a DigiTech Drop or Whammy and a touch more hiss, too, but we're splitting hairs here. As ever, adding drive after the shifted signal makes it more convincing, however.

But how do you play Killing In The Name on it? Well, a quick press of the latch button converts the Pitch Fork's footswitch into a momentary switch, giving you ultra-fast pitch rises and glitchy triggered shifts.

However, if you want more accuracy, plugging in an expression pedal gives you full control over your shift in non-latched mode, while switching back to latch allows you to set the pitch rise - or drop - time of the footswitch, depending on where you set the treadle.

EHX has knocked it out of the park with the Pitch Fork: the tonal potential from such a tiny box is damn near overwhelming, especially considering the tracking accuracy and overall tonality of the shifts.

Once you factor in the cost of an expression pedal, it ends up costing a little more than a Whammy, but if dual harmonies, form factor and battery operation matter to you, it's worth splashing out to stick a Fork in your rig.