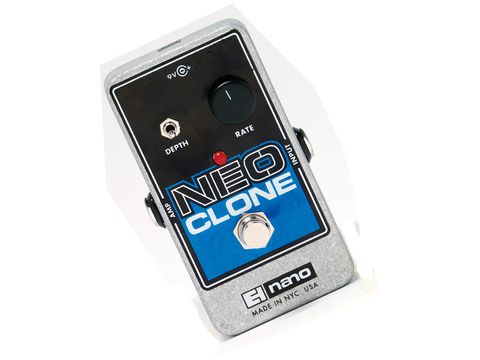 There's an ever-increasing choice of weird and wonderful E-HX pedals available these days, but make sure you check this one out.

Thanks to Kurt Cobain, the Small Clone chorus has long been one of E-HX's most revered stompboxes.
"It's as close to the original Small Chorus as makes no difference."

Unlike the Nano Clone, which due to its lack of a depth switch can never quite get that classic wobble, this Neo version aims to provide the genuine effect in the same Nano-sized housing.

It employs the same basic circuitry as the Small Clone, and E-HX states that the electronics have also been "massaged and tweaked to improve accuracy and offer superior sonic qualities".

The screen-printed livery here is its customary rough and ready self and controls comprise a single rate knob plus a micro switch that provides two intensities of depth; heavy and light.

Some E-HX units have a well-earned reputation as being over-the-top sound generators, but it's possible to obtain more subtle tones.

That's certainly the case here - if you set the rate to 10 o'clock with a light depth, any clean tone will reap the benefit. The heavier depth setting is more in Andy Summers and vintage Alex Lifeson territory, with plenty of warm vintage shimmer on tap.

We authentically recreated the classic Come As You Are modulation with the rate set around 12 o'clock and a heavy depth - increasing the rate just adds to the Soundgarden-style movement without really getting too far out of control.

It's as close to the original Small Clone as makes no difference and, best of all, should fit snugly onto your existing pedalboard.