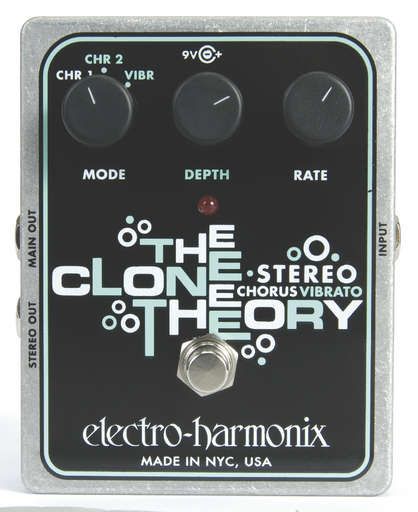 The Clone Theory isn't our personal favourite Electro-Harmonix chorus, though the vibrato mode widens its appeal considerably, making it a reasonable value choice.

In recent years, Electro-Harmonix have been onto something very good indeed by offering their unique brand of frazzled stompbox psychedelia in more compact and robust housings. Alongside the genuinely pocket-sized Nano line, there are the slightly larger EHXO pedals, such as this Clone Theory.

Like its siblings the Stereo Polyphase and Stereo Pulsar, the Clone Theory is a stereo modulation unit wth a diecast aluminium Hammond-style chassis.

It should stand up to years of heavy stomping. The lack of a quick-release battery access hatch isn't really an issue with something like a Big Muff, as the battery life is such that you won't have to unscrew the back plate very often.

However, in the case of modulation effects such as the Clone Theory, it's often a different story. We would like to see some provision for this in the form of a simple plastic hatch, or metal plate like many manufacturers utilise.

The Clone Theory is an old name from the seventies E-HX catalogue that's been revived and given a fresh lick of paint.

Its three modes provide one chorus voice with a preset depth that its designers regard as the 'perfect chorus', a second setting that allows you to set the depth and a third vibrato voice that removes the dry signal entirely, and should provide interesting results.

We like E-H's Stereo Polyphase and Pulsar, so are surprised to be a little nonplussed by this Clone Theory. In CHR 1 mode, there's a nice vintage-style analogue chorus sound, but to our ears it doesn't quite have the three-dimensional mojo of a Small Clone.

CHR 2 gives you more control over the pedal's tonal shape and adds extra depth, and with our stereo set-up it's easy enough to make a decent fist of lush Andy Summers-style washes.

If this all sounds too mundane then try the vibrato mode: with the dry voice removed, it's possible to add anything from a subtle wobble to a completely inebriated warble that wavers in pitch like a knackered old turntable. It's great fun, but not a sound that you'd want to trigger by accident at a gig!

Also, none of Electro-Harmonix's pedals are the quietest stompers available, with discernible hiss from this Clone Theory in particular.

Make sure you give it a good demo at volume to see if that's a problem for you. Using them in the traditional way - mono into the front of a single amplifier - offers good results, but if you have the facility to use it, the stereo spread opens up some very interesting possibilities to enliven your sound.