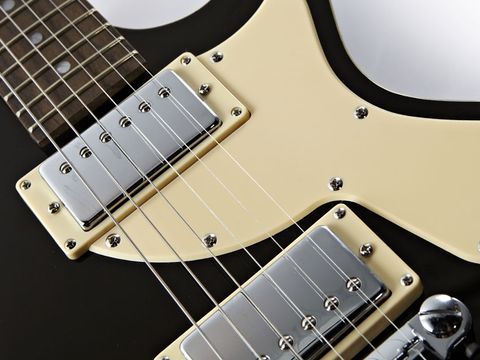 It may not be a heart-stopper, but empires have been built with guitars like this.

Rock 'n' roll is all about the simple things. It's an indisputable fact. Whenever a band strays too far from the basics - no-nonsense drumming, pounding bass, a shoutable chorus and, of course, a loud guitar or two - something is lost.

It's a dangerous road; you might end up playing angular jazz to intense Belgians, and no-one wants that, not even the Belgians. That's because humans are genetically predisposed to enjoy rock 'n' roll.

The sort of people who make rock 'n' roll - young, broke, pissed-off (that's you, right?) - need guitars like the Eagletone South State C50. Instruments like these are catalysts, transforming garage-band intent into the sort of three-minute adrenaline bursts that frighten small children.

This is a basic, no-frills Les Paul-a-like that takes the template made famous by Gibson and does what a thousand other cheap and cheerful manufacturers have done. Namely, approximate the shape, bolt on a neck and a couple of humbuckers, and hope for the best.

Crucially, the C50 achieves everything the cash-strapped young buck with three chords in his pocket, and not much else, could ask for. The body is a flat-topped slab of ginkgo - not a species of wood you might immediately recognise, but a quick strum reveals a healthy resonance that gives your ribs a good shaking.

Together with a well-finished and comfortable bolt-on Canadian maple neck, it's almost ruthlessly utilitarian. The screwed-down scratchplate is the only design quirk that looks outside of the low-cost Les Paul norm. Everywhere else, things are understated and functional, from the logo to the headstock shape.

The chunky strap buttons and industrial-grade machineheads aren't exactly top of the range, but they get the job done. Controls are boiled down to volume, tone and pickup selector, the essence of simplicity. A wraparound bridge completes the adornment, and, frankly, what else do you need? Some of rock's greatest tracks have been recorded on guitars with less.

Plug it in and the C50 is quickly revealed to be a thoroughly capable little guitar. Clean, the twin humbuckers are basically inoffensive, and more than able to deal with your light strumming needs, but it's through a dirty channel or a nasty little fuzz box that it's most fun. It's a surprisingly resonant beast, and with that all-important buzzsaw edge, it's enough to make beginners feel like rock stars, and more experienced players to forget the posing and indulge themselves.

This is a guitar that has been built with care, and to last, and that will not embarrass you (you'll have to do that yourself). There are some shoddily made electrics out there, but this isn't one of them.