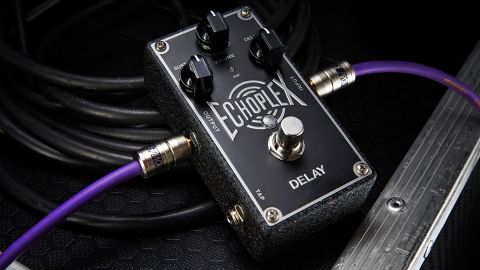 The Echoplex's authentic vibes are hugely addictive, and once you've played with it, you may struggle to play without...

In the pre-digital delay days, the Echoplex found its way into the rigs of such legends as Jimmy Page, Brian May and Andy Summers to name a few.

Launched in 1961, the Echoplex had two valve-based incarnations before the solid-state EP-3 appeared in 1970.

Unlike the multi-head designs typical of Copicats and Roland Space Echoes, the Echoplex featured just a single replay head alongside a record/erase head that could slide along a fixed axis - the distance between the two heads set your preferred delay time.

The typical Echoplex sound had consecutive repeats with a natural decay, but guitarists also liked the EP-3's FET preamp, which could boost an amp and add a pleasing colour to the sound. Production of tape-based Echoplexes ended in 1991, but the Echoplex name was bought later by Jim Dunlop and has recently been revived for its preamp-aping Echoplex Preamp and now, the Delay, designed to replicate the actual tape echo.

Like many delay pedals, the Echoplex has knobs to control delay time, feedback and volume, but it also has an Age parameter, brought in and out by a press on the volume knob, which is designed to emulate sonic artefacts, reflecting the idiosyncrasies of tape echoes.

Turning up the Age (by pressing and hold the volume knob) dials in increasing modulation to simulate the 'wow and flutter' typical of tape transport mechanisms, but also changes the tonal qualities of the repeats from a clean yet vintage timbre through edgier and grittier to repeats that are quite fat and distorted, saturated tape-style.

Where the standard mode does a pretty good impression of a tape echo in good working order with new tape, the various degrees of Age offer up plenty of options to replicate a machine that may have issues and tape that's well-worn.

If you're looking for esoteric delay types, this might not be the one for you, but with delay times from doubling up to 750ms (increased to a whopping four seconds with Dunlop's sold-separately Tap Tempo footswitch), plus character and blending from the Age parameter, there really is scope for all flavours of vintage repeats.

If it really has to be tape, you could search eBay for a vintage Echoplex or plump for Fulltone's modern take, but Dunlop's offering gives you a delay experience that's similar to an original without any of the maintenance issues - plus it will fit on your pedalboard.