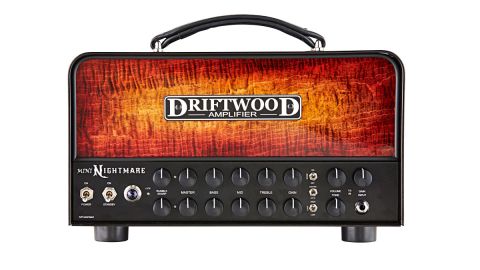 Compared to some other metal-case amps it's not so cheap, but the quality of what's on offer here more than justifies the price.

There doesn't seem to be any let-up in the popularity of small metal-cased guitar amps and, to underline that, it's time to welcome another new brand to the UK.

Driftwood Amps' products are designed and made in Bautzen, Germany by Marek Drozdowski. His range includes a full-size head called the Purple Nightmare and this one, a smaller, metal-jacketed head, appropriately named the Mini Nightmare.

This little Nightmare may be smaller than its bigger brother, but there's been no compromise in features or build quality. The case is satin-black paint on steel, and would be in danger of looking somewhat boring if it wasn't for a dazzling flamed maple front panel finished in something Driftwood calls 'Lava Burst'.

All Driftwood amps are built to order and there's a very long list of finish options to cater to all tastes. Inside the steel chassis, the Mini Nightmare's electronics are mostly contained on one large high-quality printed circuit board, with short flying leads to front and rear panel items for ease of servicing and improved reliability.

The layout is clean and economical, using relays for switching with high-quality components including orange drop and Wima capacitors, with a mix of metal film and carbon comp resistors, indicating a deep knowledge of old-school valve circuit design. Overall, it's a very high-quality product intended for pro use and should last a lifetime.

The Mini Nightmare's distinctive layout has two separate preamp channels for clean and overdrive sounds, with an assignable built-in TS-type overdrive circuit, which sits at the front of the signal chain and can be set to work on either channel, or footswitched.

The clean channel has a bright switch, while the overdrive channel has a boost switch that adds a substantial dose of extra gain and volume. There are two sets of gain, master volume and EQ controls, together with Rumble and Sharp controls that fine-tune the output stage tone.

On the rear panel, there's a trio of speaker outlets, together with a series effects loop and a recording output that features a switchable speaker simulation circuit with a choice of two voicings. There's also a power amp off switch for silent recording.

The Mini Nightmare comes with two footswitches that handle channel, TS-overdrive and effects loop operation: these last two can also be assigned using a pair of rotary switches. A handy nine- volt DC outlet enables pedals to be powered directly from the amp without the need for separate power supplies. Neat.

The Mini Nightmare powers up quietly and smoothly, often an early indication of good circuit design. The clean channel is warm and very responsive with smooth tone controls that interact in a very pleasing manner with no unwanted peaks, making the Mini Nightmare far from a nightmare to dial in.

The bright switch adds significant extra snap, helping balance out guitars with high-output humbuckers, which often sound muddy when played clean. The overdrive channel has a very wide range of gain with a high/low switch that adds an extra stage for very thick distortion tones; this is ideal for modern rock and metal players and very much in tune with the Euro- rock sound, which has a touch more midrange than you'd hear in the States.

Added to this, the Mini Nightmare's secret weapon is a built-in overdrive pedal based on a certain very well-known design. This overdrive circuit has separate controls for gain, tone and volume and can be assigned to either channel as well as being footswitchable, adding significant extra versatility. With all this gain on tap, noise could be an issue. However, our sample comes with an optional noise-gate circuit that holds everything in check quite effectively.

We like the Mini Nightmare's American-influenced clean sounds just as much as the different overdrive textures - although it's aimed primarily at modern rock players, there's a lot of subtlety lurking in there, too, making it equally rewarding for playing that relies more on expression than speed.