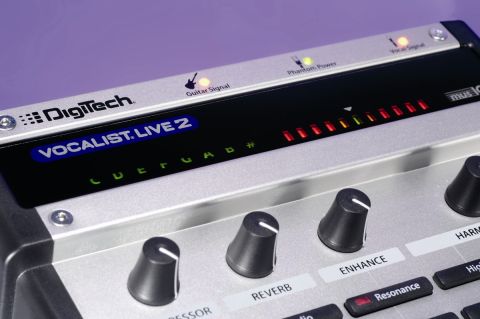 This type of thing could get very complicated but DigiTech has made it as simple as possible, which is the real selling point here. Here you simply sing and play, and you're rewarded with complementary harmonies that fit the tune. If you play rhythm guitar and sing, make a beeline for Vocalist Live 2.

Now here´s something: a stompbox that you plug your guitar into that does absolutely nothing to its sound! This is a voice processor, the main function of which is to add two-part harmonies to a vocal part. The guitar´s role is to dictate what those harmonies, based on the chords you're playing, should be.

The guitar and a vocal microphone are plugged in; the unit 'listens' to the guitar and applies pitch shifting to the vocal, adding the right harmony notes for the song. The rationale behind the Vocalist Live 2 is that some other vocal harmonisers, which are programmed to respond to a specific scale or key, can often put out an inappropriate harmony when confronted by a song that doesn't work with a single key/scale setting.

DigiTech quotes the case of a song that has the same note sung over two different chords - perhaps a C sung in the melody over a C maj/F maj chord sequence. Something like that would confound a conventional harmoniser. By contrast the Vocalist Live 2 harmoniser will follow the guitar chords. If you're singing an A over the chords that are generally found in the key of G, it will generate a C as harmony. But, if you then play an A major, it will shift to the C#.

Vocalist Live uses DigiTech's patent-pending musIQ technology to directly analyse the output of any electric or preamplified acoustic guitar that's plugged into it - no MIDI guitars or hexaphonic pickups are required. DigiTech says that the musIQ detection section can analyse complex guitar waveforms and determine which notes in each chord are critical to accurate harmony. This information is then fed to an advanced harmony engine that creates harmonies consistent with both the singer's melody and the guitar accompaniment.

The Vocalist Live 2 is powered by a 9V adaptor and is designed as a floor pedal that comes first in the signal chain after the guitar because it needs a pure guitar signal to function correctly. The guitar input and output are hard-wired so that there is no degradation of the guitar signal as it passes through. The vocal is fed into the unit directly from a microphone into an XLR input or through a line input which can take the signal from a mixer or an audio interface, allowing previously recorded vocals to be used.

There are both mono (XLR) and stereo (6.4mm jacks) options for outputting the effected vocal signal and both can be used simultaneously in such instances as feeding a powered monitor as well as the main PA. A front panel 'harmony mix' knob sets the blend of the original vocal and the generated harmonies and runs the whole range from vocal only to harmonies only.

Besides the harmony generation the unit has other processing, controlled by three more front panel knobs, that can be applied to the vocal. Firstly, compression can be applied to smooth out the vocal signal, then a touch of reverb can be added with a choice of studio, room or hall sounds. The 'enhance' knob brings in EQ in three different flavours - resonance (low and mid boost), clarity (mid-range cut) and shine (high-end boost).

Two footswitches turn the whole thing on and off. The harmony footswitch switches the harmony generation in and out while the effects switch is used to bypass the rest of the effects processing - this can also be held down to engage the onboard chromatic guitar tuner. The unit will be confused as to what harmonies to generate when confronted with an out-of-tune guitar so this facility is crucial.

Setting up the Live 2 is simple - the front panel knobs and buttons are appropriately named and very intuitive, while the red LEDs on each button let you know exactly what effect is active. The compressor works very well in keeping the voice consistent and upfront, and the three different 'enhance' settings can subtly tweak the voice to bring out more of the desired character.

The smooth-sounding reverbs have been picked to suit vocals and can add a definite sense of space around the voice, if needed, or at higher knob settings be switched in with the footswitch as a special effect. The harmoniser itself works just fine, adding in some extra sympathetic voices with careful setting of the mix knob allowing them to blend in naturally without dominating the main vocal.

As is the case with other harmonisers in a similar price range, the pitch-shifted harmonies are not pristine copies of the main vocal - they can sound a little 'swimmy' and a touch metallic but you really don't hear that unless you crank them up way beyond the level of the lead vocal, which really defeats the point of what this unit is all about anyway. With the correct blend set and a touch of reverb they can sound quite sublime and very close to the real thing.

The thirds and fifths above and below plus the two unison settings provide a range of combinations that give plenty of scope for finding something that will both suit your voice and the particular song. We tried to catch it out with different strumming styles and obscure chord voicings but, as long as your voice is singing the right notes to fit the song's chords, it seems to have an innate ability to always come up with notes that fit in musically. It worked both live and with a recorded vocal and rhythm guitar.