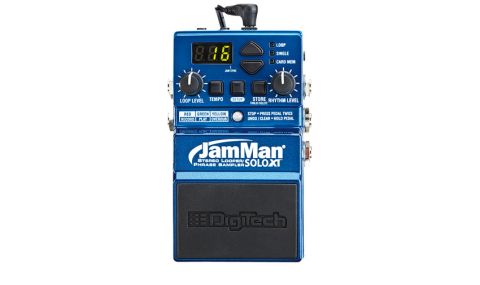 DigiTech transforms its most compact looper into a more powerful machine with more creative possibilities.

The original JamMan Solo pedal, launched a couple of years ago, put its looping technology into a compact pedal that would easily slot into any pedalboard setup. The new JamMan Solo XT, which replaces it, is more of the same as far as size goes, but expands the facility set considerably by offering stereo inputs and outputs over the original's mono, more than double the number of onboard loop storage slots, and the new JamSync facility, whereby multiple units can be linked together and kept in perfect sync with each other.

The JamMan Solo XT provides the ability to store 35 minutes of CD-quality loops in 200 internal memories, plus up to 200 more courtesy of a memory card expansion slot on the side of the pedal, which takes Micro SD/SDHC cards up to 32GB.

Power is supplied by the included nine-volt adaptor, while other features include a mini stereo jack aux input so you can import music from CD and mp3 players. Time stretching is available for phrase training, although the JamMan Solo's facility to plug in headphones has gone.

However, the XT does feature a USB socket that allows transfer of audio to and from a computer, which connects with the free JamManager XT Loop Librarian software to organise and archive loops.

Before you start recording a loop, you have to first choose a numbered memory location by scrolling through them with a pair of up/down buttons adjacent to the small display. The pedal's footswitch provides the default method for recording a loop and playing it back - one push initiates the recording, a second ends recording/sets the loop end point and starts playback, while two quick pushes stop the loop playing.

You can also make as many overdubs to the loop as you like with more pedal presses, and if you make a mess of a particular overdub, it can easily be undone by holding the footswitch down. New to the XT is a very practical auto record feature, which initiates recording only when you start playing, giving you a precise loop start point every time. This may make recording a loop easier for some users, since timing is the key to optimum results.

If free-form looping, where you initiate recording and set your own loop end point, isn't for you, the JamMan Solo XT also offers auto quantized looping, where you can set a tempo and have the length of your loop automatically adjusted to fit.

There are aids onboard to help you play along with the set tempo - LEDs flash in time for a visual cue while, for a sonic guide, there are nine simple rhythm patterns onboard, with a dedicated knob to control their volume.

Setting up for JamSync is simply accomplished by connecting a mini-jack stereo cable from the dedicated output of one pedal (thus designating it as the master unit) to the other's input. One or more linked units support the recording of phrases of different lengths in each, while staying in perfect sync, allowing intricate loop layering.

Now, this may be nothing new for a single player - there are many loopers that support multiple loops in one unit. But this opens up the possibility of ensemble looping, with each player having a pedal and controlling their own loops, while being completely synchronised to each other.

Being so easy to use, this pedal has many uses, not least as a fine tool for practising parts - you can quickly record a rhythm guitar part to solo over, you can play along with the onboard rhythm tracks or you can load any music you want into it for playing along with/ learning. Similarly, you can load it with backing tracks for onstage use, although hands-free changing from one loop to the next does require the use of an additional FS3X triple footswitch.

It's in the realms of creativity that the JamMan Solo XT excites, though. Setting off on a musical journey and adding fresh parts as you go is the joy of looping, but the JamSync function also offers the potential for a new form of jamming, with several musicians being creative together. You'd have to buy more than one pedal for that, but we don't think DigiTech would mind...