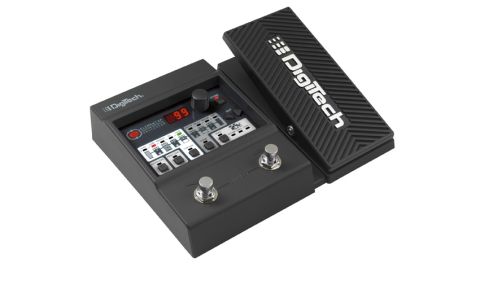 Like the best multi-effects, rather than leaving you endlessly tweaking sounds, the Element XP actually makes you want to play.

Multi-effects get a bad rep. Sure, back in the dark ages, you were stuck with patchy simulations of classic amps and brittle effects you wouldn't dream of using. Nowadays, it's a very different story, with a wealth of impressive do-it-all boxes populating floors across the globe. Now DigiTech has thrown another into the fray with the Element XP.

This petite expression-pedal-loaded unit packs in 58 effects, 200 presets, plus 45 drum patterns. It's made of hardened plastic, which should see you through a fair few gigs, and though the expression-less Element costs £20 less, the XP's extra wah and Whammy effects are worth the extra.

The factory presets of multi-effects units can disappoint. Not so with the Element XP, where - multi-effects in usable presets shocker! - all 100 of the pre-programmed tones sound great and inspire you to play. That's in part down to DigiTech's wise decision to avoid assigning cabinet simulation to patches; the Element XP is designed to be run old-school, into an amp - cab simulation is available, though.

Next, it's time to create a few patches of your own: the Element XP's diddy screen can only display three characters at a time, so you'll need to be an aspiring mnemonist to make the most of it. Controls are limited, too: two edit keys scroll through the nine sections that make up your signal chain, while the select knob switches between models.

But rather than individual parameters, each amp or overdrive pedal has nine versions with increasing levels of gain, while there are multiple incarnations of effects, which account for different speeds. It sounds a bit backwards, but it supports the Element XP's case as an entry-level multi-effects: you use your ears to choose sounds, rather than getting bogged down in minute adjustments.

Once you've got your head around actually setting the thing up, the Element XP's tones are surprisingly usable. Aside from a few fizzy high-gain sounds, the models of classic British and American amps and overdrive pedals are all remarkably faithful, and the modulations and delays are outstanding - we particularly love the Whammy sounds, which recall the original's glitchy warble, while the smooth expression pedal makes them a joy to control.

The Element XP is something of a contradiction: the great-sounding presets and back-to-basics editing point towards a forward-looking entry-level unit, but the tiny screen recalls the frustrating multi-effects of the 90s.

Still, even if you don't master the editing process, it's a killer practice tool - we haven't even covered the built-in tuner and drum patterns!