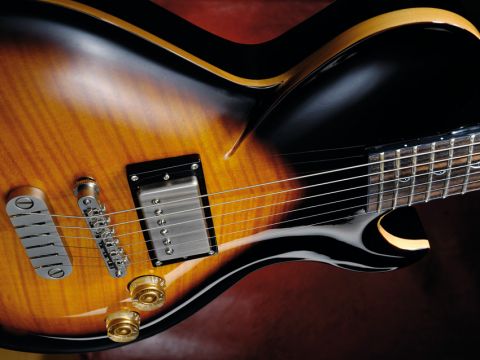 Here's a guitar that proves Dean is about a lot more than just metal - a classy design with serious classic clout in the sound department.

Think Dean and many of us probably just think of extravagantly-shaped metal axes. Yet Dean has always had a more classic side, and at various prices points its Les Paul-inspired Soltero is a classy looking alternative to Gibson's finest.

It was this guitar that Dean Zelinksy [Dean founder, now at DBZ Guitars] had in mind when he created a signature model with Mountain legend Leslie West. Known for his use of a single-cut Les Paul Junior, it's little surprise that the Leslie West model features just the one pickup. Yet although all-mahogany versions are available, the Korean-made Brazil burst Standard is more akin to a single-pickup LP.

With a slightly trimmer body length, narrower waist and slightly broader lower bouts than a Les Paul, this design has a little of Zemaitis about it. It's just under a full Les Paul depth at 58mm, with a chunky 9.25lb weight to go with it.

The mahogany back is topped with a carved maple top and that, despite Dean's spec sheet, is topped with a flame maple veneer. The upper shoulder's rounded line cuts into the bass-side of the body giving, as with the Soltero, a very distinct visual motif.

The edges of the maple top and this cut-in, are left natural in a PRS-style, while the top adopts a classy two-tone sunburst that's amber in the centre fanning out to black at the outer edges; the sides, back and neck are also opaque black.

The combination of the maple veneer, that cut-in and the natural edges does mean there are a few rough spots, but it's not an easy thing to do compared to a simpler, bound-edged Les Paul.

A slightly 'V'-shaped mahogany neck is smartly joined to the body at the 16th fret, Les Paul-style, and only the quite flamboyant three-aside headstock veers towards metal-dom. It also contributes to a slight neck pull when strapped-on.

The dark rosewood fingerboard appears unbound, but as with many far eastern brands (Yamaha included), actually has a black plastic binding, giving a clean look to the edge with no visible fret slots or tangs. Frets are tidy, as are the tasteful, mainly pearl, Soltero inlays.

The hardware - a generic tune-o-matic bridge and separate anchor block, plus chunky but responsive Grover tuners - has a smart satin nickel-plating to it.

The strap buttons (which appear to be licensed versions of Warwick's Security Locks) ape Dunlop's Straploks: the 'male' plugs attach to your strap and push into 'female' ferrules in the body. All good, so long as you don't forget your strap.

Check it out in action:

The single Dean USA Mountain Of Tone humbucker is a high output-type (16.57k ohms) but with an Alnico V magnet. There's no trickery, just volume and tone (with standard knobs that don't go to '11').

Our test valve amp struggled to stay clean with this sort of input and the strident mid-range is more than evident, the highs are a little lacking in sizzle and bass isn't over endowed. But that forceful mid-range saturates a crunchy tone nicely for a very seventies, grinding, hard rock tone.

The volume control cleans things up a touch before dropping off, but something a little more graduated would add some versatility and the tone roll-off is too woolly for a convincing 'woman' tone.

Compared to a PRS Singlecut - hardly fair bearing in mind the price point - it lacks some roomy resonance and, at high-gain, clarity suffers a little too. But dial in some old-school Marshall-esque crunchy distortion and it offers a near-perfect throaty and retro hard rock voice.

Leslie West's name has little draw unless you're a guitar player of a certain age. His guitar, however, especially in this Standard format, ought to have wider appeal. It's a pretty well-made, brutish but classy design.

One of the smartest LP updates currently available, it offers a rock-ready and powerful voice. It doesn't do versatility, it's a plug-in-and-play-me machine, but what it does, it does very well. Time to reform that seventies-era power trio, we reckon.