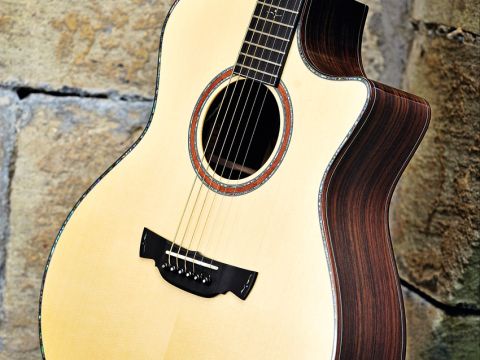 Once the preamp is sorted, Crafter has a deserving flagship electro on its hands.

Crafter was once a predominately budget acoustic name and there are still models, such as the Lite and Silver Series, that occupy these lower price points.

Inexorably, however, the brand has been moving upmarket, exemplified not least in recent years by the all-solid-wood TV Series and the thin-line Slim Arch hybrid electros.

The most significant jump towards the pro sector came in 2007 with the launch of the GLXE cutaway grand auditorium electros, where high-grade all-solid timbers and specs were the order of the day, and whose ongoing 3000 and 4000 models nowadays retail over £1,000.

"Powered performance is something of a mixed bag, though it should be stressed that our guitar is a very early production sample."

Upward evolution continues with the flagship GLXE-6000/ RSB, carrying a price tag just shy of £1,499. An appreciable sum of money, then, but the presentation is appropriately in the luxury mould, strikingly conveyed by the guitar's back and sides.

Rather than simply the rosewood of its cheaper stable-mates, the 6000 adds a centre portion of lighter-hued bubinga to the back and across the end-block, the two timbers separated by coach-lined fillets of maple: very tasty, as is the quality of the body's gloss livery and the instrument's overall standard of build and detailing.

This theme is continued for the position markers along the ebony fingerboard, which is smartly edged in two-ply black/white binding. Up on the ebony overlaid headstock sit a set of gold Gotoh 510 deluxe tuners.

Gearing is 18:1, which provides very smooth adjustment; although some players may feel they're a little low-geared. They do look the part, though.

Quite a few Crafters come with semi-wide finger-style necks, and this is what we find on the 6000. Kicking off at 44.5mm across the nut, the satin-finish one-piece mahogany affair broadens a fair bit further up, but thanks to a reasonably moderate-depth 'C' profile and a gentle fretboard camber, it's a comfortable, fast playing handful, fulfilling the requirements for both accessible strummage and spacious, well-defined picking.

There are, however, a couple of aspects on our sample that merit a bit more attention: the fret ends feel a tad sharp, even if the fretting is otherwise nicely fitted and dressed; similarly, the front corners of the bone nut need rounding off to eliminate slightly painful contact against the side of your hand when moving back to open-position playing.

Arguably, and despite a speedy, lowish overall action, the nut slots would benefit from being cut lower to reduce the risk of finger-pressure intonation wobbles, which occur occasionally at low positions on the A and bottom E strings. These, though, are all things that can be easily sorted as part of a final pre-buy set-up.

Crafter has developed various preamp systems over the years, and the GLXE-6000's is the new LR-T DX paired with an LR Baggs Element under-saddle pickup. Like the company's Stage Pro Tuner system the DX offers four-band EQ and phase, but goes on to add a notch filter (0-300Hz) and a more sophisticated tuner that can be switched between auto-chromatic and preset string modes.

Underneath an LED arrows-cum-dot arrangement to indicate pitch status, the LCD depicts a virtual needle and the display's backlight changes from amber to green as additional confirmation that a string has hit pitch. It's fast, accurate, bright and very easy to read. The tuner also usefully mutes the system when activated while powered up (something the Stage Pro doesn't do). It can also be used acoustically.

Another upgrade - which allows simultaneous running to backline and PA - is the provision of jack and XLR outputs on a panel adjacent to the endpin. The panel also houses the quick-release battery holder, where previous systems have had theirs incorporated in the preamp.

This GLXE is a physically quite heavy instrument (tipping the scales at 5.5lb), which in theory could militate against resonance. In reality, although there's a faint element of compression to the dynamics, the acoustic delivery is good, combining decent clarity, note definition and sustain with a tonal blend of warmish lows and bright-ish highs.

Powered performance is something of a mixed bag, though it should be stressed that our guitar is a very early production sample (that also did duty at the Frankfurt MusikMesse for the model's European launch), which might explain why the preamp doesn't seem to be fully fettled.

In what way? Well, the bass EQ is decidedly odd. When notching is off, the band actually seems to work in reverse, producing subtly greater low-end at full cut than full boost! This sorts itself when notching is brought into play, but low-frequency tonal variation remains very, very modest - hugely less than the quoted +/-12dB range ought to achieve.

Our sample also isn't helped by slightly dominant top and bottom E outputs, but that's presumably down to the under-saddle set-up.

Fortunately the system performs well in all other respects. There's a decent amount of gain; the tonal scope of treble and presence is sensibly considered, with the anticipated interactivity depending on the bands' relative settings; phase and notch filter are effective in their own right, and the midrange EQ is very sympathetically judged. It duly scoops when cut, and when boosted introduces a pleasant, creamy jazzy timbre, not the honky stridency that's sadly often the case with mid boosts.

It's a shame that an aspect of the preamp's behaviour isn't what it should be, but one assumes that will get sorted for future shipments and shouldn't cloud the fact that, even as things stand, the GLXE-6000/RSB is a very desirable instrument capable of delivering a convincing palette of unplugged and electro sounds, along with good, picker-friendly handling.

The instrument's plush, though happily not tackily flash, and presentation counts in its favour too, justifying its status as Crafter's top-range grand auditorium.