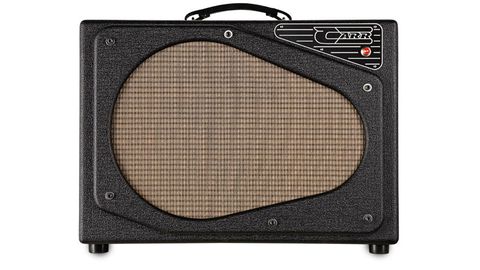 One of the biggest nuts to crack for any boutique guitar amp builder is developing a unique identity - not easy in today's saturated market. Carr Amplification has managed to do just that, steadily creating a range of products that mixes 50s amp styling with contemporary high-gain overdrive sounds.

An assortment of high-tech audiophile components such as Solen polypropylene capacitors and Analysis Plus speaker cable blends with true point-to-point construction, making Carr one of just a handful of modern-day manufacturers producing point-to-point amps in any kind of commercial numbers. Founder Steve Carr also has an innate ability to zero in on particular tones and turn them into new amps, which brings us to his latest offering: the Bloke.

The Bloke combo version is compact, smartly proportioned and built to a remarkably high standard. The cabinet is solid pine with dovetailed corners, expertly covered in black Tolex and accented by a silver string.

There's no separate front baffle: instead, the cabinet front panel supports a single rear-mounted custom Eminence driver. The unusual speaker grille secures to the front with six Allen head bolts and spacers, giving a three-millimetre gap between the grille and cabinet front.

"With this amp, we fully integrated the speaker baffle into the cabinet," comments Steve Carr. "There wasn't a way to add grille cloth in the box itself, so instead we added it 'outside the box'. Lou Gagliano, head of our cabinet shop, came up with the 'flying grille' idea and design; we then had the Carr plate made to fit in the upper corner and imply a motorcycle look, like a side panel. The front pilot light was a fun thing that followed on from this."

The Bloke's electronics live in a thick aluminium chassis with welded corners. There's no printed circuit board, eyelet board or turret board - all the components terminate to each other, or one of several tag strips. Most Carrs exclusively use Solen polypropylene hi-fi capacitors; however, the Bloke's circuit includes several electrolytics. There's also an LED diode clipping circuit, which may cause valve purists to raise an eyebrow or two.

Carr explains: "I tried very large electrolytics throughout and loved the super-solid sound and feel, so every stage has at least 220 microfarads of filtering. However, each electrolytic is bypassed by our traditional Solen polypropylenes. These open the sound up, so we have muscle and air.

'The LEDs are only active in the lead mode; they're part of the tone shaping and add a wonderful crunch. The inspiration for that came from some great Marshall amps from the late 80s, which had a similar feature.

"When I prototype I start with a concept - a British style amp, let's say - and then I start tweaking. For me, that process is like looking for water with a divining rod: the amp takes me here, there and back again. "The Bloke is a combination of things you don't see much in guitar amps, yielding wonderful sounds that are familiar. I like it that way.

"The bass tone control runs on a separate circuit, which was another inspiration, this time from the infamous 'Pig' amp - the Marshall 200 that lasted for six months before [the company] reworked them and came out with the Majors. I also used a direct-coupled cathode follower 12AT7 after the 12AX7 phase inverter to really drive the power tubes - similar to the old SVT bass amps."

The Bloke's control layout is unusual but simple, and it's also easy to get to grips with. A single drive control sets the amp's overall front-end gain, feeding separate loudness controls for the rhythm and lead channels as well as a bass, mid and treble EQ.

This particular amp features the Bloke's optional effects loop, which is a little unusual because it comes in a separate Loop Interface pedal that matches levels and buffers the inputs and outputs. All in all, the Bloke is a typical Carr amp: super-high build standards, plus top-quality components and plenty of boutique cred, yet still entirely practical to use.

The Bloke's normal channel has outrageous touch sensitivity - perhaps more than any other amp we've tested. This means you can go from an almost clean rhythm tone to a very strong crunch just by varying how hard you hit the strings, or by tweaking the guitar's volume control.

The drive control fine-tunes the amp to suit different pickup outputs. Set it up right, and you're rewarded with a fabulous and highly expressive tone that nails the early-70s British classic rock vibe. Harmonic-laden Status Quo powerchords are nailed perfectly, as are many classic Stones tracks from Brown Sugar onwards.

There's more, too: changing the speaker impedance switch to four ohms yields a slightly darker tone that captures the elusive Strat sound Ritchie Blackmore created on Fireball and In Rock.

Flipping the normal channel's toggle switch into high-gain mode punches in massive overdrive for serious 80s rock powerchording. The downside of having so much dynamic range to play with is that you really have to commit to each note; the slightest mistake is thrown into sharp relief. The lead channel is a little more compressed and easier to control, with a sparkling harmonic crunch that adds definition without piercing your eardrums.

For classic 70s and early 80s Brit-rock, the Bloke exactly captures the right feel. It sounds great with a Strat or Tele, but plug in a good Les Paul and it really comes alive. It's also seriously loud and full-sounding for a 1x12 - the custom Eminence driver is superb, and copes easily with the Bloke's powerful yet tight bass response, which is even more precisely focused by the very rigid cabinet design.

Like many boutique amps, the Bloke zeros in on a particular set of tones, and for players who want that retro 70s British vibe, it's an awesome tool: a sonic time machine that will return you to the heady golden years of British rock guitar. Outside of that genre, it's not overly versatile, but that's what this kind of amp building is all about.

Players who know how to control an amp with pick dynamics will get it straight away. The Bloke is highly responsive - maybe too much, but occasionally teetering on the verge of uncontrollability is part of its charm for us.

There are many fine amps fighting for their share of the Bloke's market, but few deliver this type of tone with such power and excitement. Yes, it's expensive, but set against the serious competition, we think the Bloke still represents good value for money.