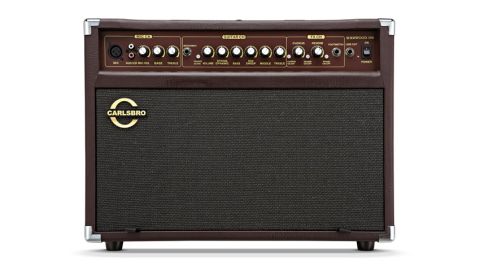 If you're in search of a darker sound for rootsier acoustic tones, add the Sherwood II to your list.

The acoustic guitar amp market is small - much like the majority of its products - but for those of us who rely on an amp as our main amplification source or as a personal monitor DI'd into a PA, these small boxes are crucially important.

Amplifying an acoustic guitar isn't always easy and, ironically, the further down the food chain you are in terms of your gigs, the harder it can be without the benefit of spacious stages, soundmen, monitor engineers and the like.

The Sherwood II is the latest version of Carlsbro's long-running acoustic amp range. It's weighty (14kg), with a large cabinet that can be tilted back, ideal for onstage use. It has two specific channels (one for mic and one for guitar) and is a stereo 15-watts-per-side amp with two six-inch speakers. It's not big on feedback control, though, offering just a phase switch.

There's something very blue collar and workmanlike about the Sherwood's aesthetic. It's certainly ruggedly constructed, with dark tan vinyl covering, chromed corner protectors and large hard rubber feet on both its standard and tilt-back bases. The brown-painted fascia is clearly laid out, while the top edge of the cabinet is cut away to allow better visual access to the control legends, which, perhaps oddly, sit under the metal-topped black plastic knobs - you might struggle to see 'em when playing.

It's easy to use, however, with few bells or whistles. There's no input clip indication, so you have to use your ears, while the mic channel just has treble and bass EQ. The guitar channel is better served with a dual-control sweepable midrange (200Hz to 5kHz) and something called 'string dynamics'. According to Carlsbro, this patented rotary knob "controls a tone shaping filter. Rotating it clockwise decreases high-frequency 'harshness' while playing loudly and maintains 'crispness' while playing softly."

Effects are simply chorus (instrument channel only) and reverb, which works on both channels with the on/off switch engaged, and just the mic channel when it's 'off'. We also have two outputs: the low-impedance balanced DI-out XLR and a post-effects unbalanced line-out jack.

There's a pleasing old-school feel to this amp in both its use and sound that we suspect might well have a few fans in the lo-fi brigade - a pristine, feature-laden AER it ain't. Its tones are more akin to a clean electric amp, with a more limited frequency response in both the high- and low-end. The EQs work well enough if you don't overdo them, and the midrange notch sounds quite wide and natural.

The string dynamics feature could be useful for some: it's like a subtle compressor, so hard-hit lead lines lose their high-end zing for a jazzier tonality. The chorus is relatively subtle, the reverb a bit excessive. Overall volume is good, as is the spread of sound - it's quite roomy. For steel-string players on a budget it's a good small-gig unit, but only if you're after a darker, older sound. It works well for bluesier, more 50s and 60s sounds, and with that in mind, it works well for slide and cleaner but not pristine jazz.

This amp won't give you a powerful, overly hi-fi-like sound. But then it's not particularly expensive, and it's a credible amp for small gigs and low-level rehearsals, with an old-fashioned, narrow frequency response that might help to create rootsier acoustic sounds.