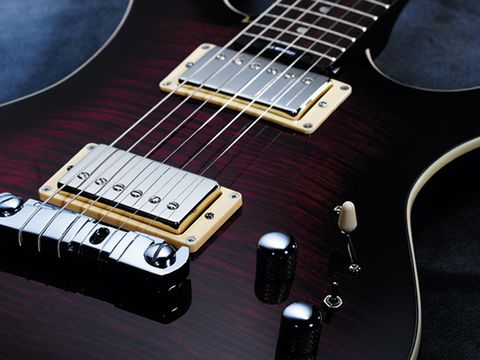 Make no mistake, the wealth of usable tones afforded by the guitar's VSC is nothing short of incredible.

The Durango name has been found on a variety of disparate Blade guitars over the years. Not least of these is the original Durango Deluxe DD-4.

That guitar was built in conjunction with Eggle Guitars and, although a double-cut, it resembled a cross between and Music Man Axis, Telecaster Thinline and an Eggle New York.

"It was one of those, 'designed on a napkin' things," Blade main man Gary Levinson told us at the time. "I got back to the workshop, started playing around with it, came up with the modified Thinline-type of pickguard, and the Durango was born."

Subsequent incarnations such as the Durango T Classic and T were single-cut designs, with either an extra central single-coil or a pair of P-90-style pickups on board. More fundamentally, the guitars had a Fender scale length of 648mm (25.5-inches).

The Durango didn't evolve into something akin to what we have here until the mid-2000s, with the introduction of the Durango Deluxe DD-2 and DD-1.

Both leant more enthusiastically towards the Gibson school, not only due to the reduced 629mm (24.75-inch) scale length, but also the dual full-sized humbuckers.

So what of this new model? "The Durango DD-3 and DD-4 have thinner bodies [than a Les Paul], giving a distinct tone that lies 'between' a Les Paul and an SG-type guitar," says Blade's Christian Hatstatt. "They're made with the rock player in mind - the DD-4 has softer pickups and the VSC-3 [active circuit], which adds versatility."

The main difference between the Durango DD-2 and this new version is the increased girth of headstock and body. Constructed from mahogany and boasting a good quality maple cap, it measures just over 33mm thickness by the rear strap pin - the exact same measurement as that of the Gibson SG 24 and a full 3mm thicker than the aforementioned DD-2.

The profile of the two-piece mahogany neck has taken a classic Les Paul, the Traditional 1960, as its inspiration. It demonstrates a superbly skinny sixties-style 'C'-shape that's been well finished and culminates in an ergonomically tapered heel that allows access to the higher frets without compromising stability.

The guitar is pretty lightweight for its style, but strapped on sits nicely, is well-balanced and reassuringly but not overly weighty.

Pickups comprise a pair of Levinson's LHN-5 'buckers, which are slanted tone-wise towards Gibson's PAF. They use Alnico V magnets instead of the more common II and III used in Seth Lover's original, but then magnets are only one part of the lore.

Loaded into the DD-4, the VSC, or Variable Spectrum Control, is a feature of the majority of mid- and higher-priced Blade guitars and is a piece of active circuitry driven by a nine-volt battery, accessible via a rear-mounted compartment.

It has three settings that can be selected via a micro switch. Also sited in the compartment are the guts of the system in the shape of a trio of trim pots that allow you to boost the mid-range (activated when the VSC micro switch is in the down position) or the treble and bass ends (in play with the switch set upwards).

Players are encouraged to experiment with settings and all you need is a small crosshead screwdriver with which to rotate the trim pots and begin the aural fun.

We had concerns that the guitar's controls are squashed too close together for streamlined comfort, but we're glad to report that, when the DD-4 goes into full production, the tone pot will be pulled back a tad to give extra room.

The hardware is rounded out by a sextet of 16:1 ratio tuners and a Wilkinson-branded wraparound bridge with an adjustable saddle for the G and B strings, not to mention the classic EZ-Access truss rod slot that sits beneath a removable plastic plate just in front of the 22nd fret.

With the VSC bypassed, the tones have a vintage Gibson flavour that sits somewhere between the roar of a Les Paul and the 'spoony' nature of an SG's bridge pickup.

Even with a driven amp, the middle position on the three-way cleans up nicely with the guitar's volume pot for funky chops or arpeggiated lines and, if you need a smoother tone, simply bypass the VSC to round off some treble.

The VSC's three internal trim pots are the key to the guitar's versatility. With all three pots at their minimum settings the tone remains unaffected but, as you give them a turn, the level of boost increases until, at the maximum settings, it's possible, for example, to add a distinct amount of gnarly drive to a clean amp tone, especially when boosting the mids.

With the VSC's micro switch in the middle position, the VSC is bypassed, which allows the unadulterated character of the pickups to come to the fore. Conversely, with maximum treble and a touch of bass boost, the VSC adds a dollop of Strat sparkle and glassiness across all three pickup settings.

If you marry this with the maximum mid-range boost setting and the bypassed option, the DD-4's versatility becomes apparent. There are a huge range of tones to experiment with that cover just about any style and the only issue we can foresee is choosing just two VSC settings.

The innovative nature of the active VSC bears repeating, as it adds so much to the voice of the DD-4. You can use an impressive number of different tones that can be easily tailored to suit: nicely priced, we can certainly recommend that players of any denomination give the DD-4 a try.

Blade has always made great guitars and we're confident this revamped Durango, with its modern feel, great choice of tones and high build quality, will appeal to a wide selection of players.