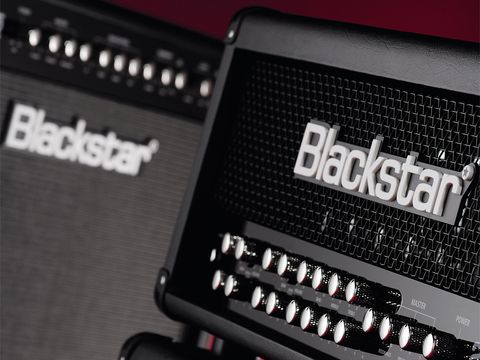 One thing that's missing from so many multi-function amps these days is character. The Series 1 amps have tons of it, with all the flexibility you need. It's been a very long wait for these amps to arrive, but it's been worth every minute!

Whoever or whatever you blame for it, the worst recession in post-war history has generally not been good news for British manufacturing. Yet sales of guitars and amps continue to be strong, thanks to a number of positive factors including, ironically, a certain plastic guitar-based computer game.

Perhaps now is as good a time as any for the debut of Blackstar's long-awaited Series 1 range. It's only been around two years since its first products hit the shelves, yet Blackstar is already seen as one of the UK's (and therefore one of the world's) top amp builders. However, it isn't just down to having good products and snappy marketing - an amp can have all the right features and styling, but within 10 seconds of plugging in, it will either connect with what makes you want to play music or it won't. So, after the long wait, do the Series 1 amps have that indefinable 'I want' magic? Let's find out.

The Series 1 range launches with three products: a 45-watt 2 x 12 combo, a 100-watt head and the KT88-powered flagship 200-watt head. We certainly like the attention to detail that's evident in the appearance of all three amps. The cabinets are built to a very respectable standard, with super clean woodwork matched by flawless vinyl covering and sharp control panel graphics. No question about it, this trio certainly looks the part.

Inside the chassis it's much the same story, with typically neat and robust PCB construction. There are boards for the front and rear panels, with three larger ones handling the power supply and main preamp components, all supported properly on robust metal standoffs. The valve bases are all PCB-mounted, which is fine - the only practical drawback is that preamp valve replacement is trickier, as they're quite deeply recessed into the chassis.

These aren't simple amps, so those PCBs are stuffed full of components, with several bundles of interconnecting wires all neatly terminated in plugs and sockets. The chassis are tough steel boxes and need to be, as all three amps have substantial transformers.

Those on the S1-200 are seriously heavy lumps of iron, which are close to being the biggest we've seen on any guitar amp. This is good news for longterm reliability, though not portability - both transformers are at one end of the chassis, balancing the S1-200 very poorly on its single carry handle. Not so clever given that this head outweighs many 2 x 12 combos. It really needs a pair of grabs at each end of the cabinet so it can be carried easily and safely.

Next to the conventional bass, mid and treble controls is Blackstar's now-familiar Infinite Shape Factor (ISF). Put simply, this knob changes a classic British EQ network into its American counterpart, with an infinite range of subtle colours between the two extremes. The master section has global controls for volume, presence and resonance, which govern the output stage's high and low frequency response.

Lastly, perhaps the most powerful control on the panel is Blackstar's Dynamic Power Reduction feature, or DPR. This is a circuit that varies the power stage's output from maximum down to just 10 per cent, so you can go from 20 watts to 200 watts.

The rear panel features consist of a series effects loop with switchable levels, a speaker-emulated recording output with balanced and unbalanced connectors, speaker outlets with switchable impedance, a socket for the supplied footswitch, and a pair of MIDI sockets for channel-switching using MIDI program change commands. Overall, three very good-looking and highly specified amps, but what really matters is how they sound and respond.

One cool thing about the S1's bright and warm clean options is that, behind the scenes, the power amp is also being reconfigured, going from Class A operation with no feedback in bright mode, to Class AB with feedback in warm mode. This makes for a dramatic difference between the two clean modes. Combined with Blackstar's ISF control, the EQ is wide-ranging, yet easy to dial in, and the gain range for both clean sounds is perfectly tuned.

Where the clean modes finish, the S1's crunch takes over and we'd have to say that the crunch mode has some of the best tone and response we've heard from any amp in any price bracket for a very long time. Bold and very forward-sounding with a fast attack, it's supremely responsive to player input and once again it is very rewarding to be able to tune in exactly the right output stage response using the DPR control.

"Unlike other manufacturers' power reduction features, ours doesn't sit between the valves and the loudspeakers," explains Blackstar's Bruce Keir. "A lot of the magic in a great amp happens in that chain from output valve to transformer to loudspeaker and you mess with it at your sonic peril. The DPR circuit reduces the output valve's voltages proportionally, maintaining that dynamic feel of power stage 'sag' and compression at any output level".

Switching to super crunch mode kicks everything up a gear for blistering solos, yet roll off the guitar's volume knob and you're back in Cleansville - it's very responsive.

As well as the aforementioned clean and crunch sounds, the S1-200 has an extra preamp valve and two extra lead modes with familiar-sounding names. OD1 has the more pronounced mid-range typically associated with classic Brit sounds, while OD2 is more balanced and aggressive.

Both overdrives have massive gain, but somehow manage to retain plenty of response and clarity too, which isn't easy. There's none of the piercing high-frequency fizz often heard in this style of amp - it's been deliberately designed out and the end result is a much more natural distortion that provides great clarity, which breathes and responds to what you play, rather than just superimposing itself on the guitar's signal. It goes without saying that this amp can be brutally loud, but with DPR you can fine-tune how much of the power you need.

If you want to get massive stadium-sized cranked-up tones at pub volumes, the S1-200 does it better than almost any other amp we know.

Blackstar's Series 1 range is going to find a lot of fans at all levels, from serious amateurs to top pro players. We like the care that's evident in every corner of the design. Cool 'secret' features such as digital valve monitoring (which automatically puts the amp into standby if you pull the guitar lead out) and MIDI channel switching are great, but let's be in no doubt about this, the bottom line is great tone and all three amps have got bucket-loads of it.

Thanks to Korean manufacturing, the price is better than you'd expect for such great performance and, if the whole range matches up to the quality of this trio, Blackstar's Series 1 amps are going to be very, very hard to beat. Sod the credit crunch - you need to try them.