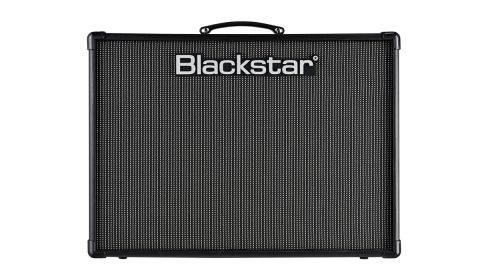 Blackstar has proved again that, when it comes to providing maximum bang for your buck, its amps are hard to beat.

Blackstar's popular and award-winning ID: series started off as affordable programmable amps with high-quality sounds and effects and up to 100 watts of power.

The concept proved  so successful that there's now an equally popular spin-off in the shape of the ID:Core series, which (literally!) expands the Core's sounds and features into Blackstar's Super Wide Stereo power stage, together with the multi-purpose bass, electric, acoustic and music home amp, the Bluetooth-enabled ID: Core Beam.

Compared with the beefier ID:TVP amps, the ID:Cores are relatively low-powered and intended mostly for practice and home use. However, the Core concept has proved so successful that there was a demand for something with a little more oomph.

Blackstar has duly obliged with yet another mini-series - the ID:Core High Power range, which currently includes two combos, the 2x10 Stereo 100 and the Stereo 150 reviewed here.

The combo is typically Blackstar in terms of styling, with clean lines, smart control panels and a solid, purposeful look. The internals are entirely solid-state, mounted on  a steel chassis that also forms the top and rear panels, with the power supply in a separate module screwed to the side.

Two special-design 10-inch loudspeakers combine high-power handling with low weight, and the carry weight is one of the most impressive things about these amps: at just over 14kg for the Stereo 150, it's a two-finger lift for most players.

The features are similar to other ID:Core amps, with a few changes. The software  has been upgraded to make space for a new polyphonic octaver effect and a built-in looper, while on the rear panel there's a stereo effects loop, so players can run their pedals alongside the Blackstar's built-in effects.

The effects are controlled from three category buttons for reverbs, delays and modulations, with a rotary effects type selector and level controls. The final knob on the control panel is the global master volume, which is the only control that's not programmable.

To that end, there are buttons for selecting banks and patches: up to three banks each with three patches can be accessed from the amp's control panel - more if you use the optional FS-12 controller. There's also a micro USB socket, a tap tempo button for setting delay times and a manual mode button.

On the rear panel, there's that new stereo effects loop, together with a speaker-emulated headphone output, and jacks for an mp3 line-in and the supplied two-button FS-13 footswitch, which can be programmed to either control the looper or to swap between two patches and toggle the effects.

The optional five-button programmable controller, the FS-12, can be used on its own or with the FS-13 for seven-button functionality. More features can be accessed using the tap button as a 'shift' key, including presence, resonance, USB record level and effects speed/time. There's a built-in tuner, too.

This impressive feature list expands even further with Blackstar's superb Insider software partner, which allows real-time amp control, deep editing of various amp and effects parameters, and the ability to create, store and share your own library of patches, together with many other features including a phrase trainer and tuner. All in, it's very impressive how much stuff Blackstar has crammed inside these amps, yet the control panel remains easy and intuitive to navigate.

All these features are great, but does it sound any good, and how easy is it to use? This combo is loud when needed, the Stereo 150 has a slight increase in bottom-end response and overall punch over the aforementioned Stereo 100 due to the slightly larger cabinet and, of course, the higher-wattage output stage.

The amp is easy to use thanks to clear panel lettering and a logical, familiar layout that's not too different from a conventional analogue guitar amp. Once the patch volume levels are adjusted to taste, the non-programmable global master volume is the only control that needs tweaking.

There's a lot to like about the Core's basic amp sounds: the two cleans are well balanced with just enough emphasis on highs to cut through without becoming shrill. The crunch sounds are excellent for blues and classic rock, while the leads cover everything from British new wave to modern USA metal with ease.

The stereo effects are impressively quiet and fun to use - the new polyphonic octaver is practically glitch-free and tracks quickly, while the looper is easy to control and a great creative tool for both practice and live performance. Having a loop to plug in outboard effects is a significant improvement and makes both combos much more versatile.

It's amazing how far digital technology has come in a relatively short time. Blackstar's Core amps are close enough to the cutting-edge to provide excellent studio-quality sounds, while keeping prices affordable.

The new High Power combos move the ID:Core's flexibility and ease of use into the live environment where players of all levels will find something to inspire them. It's often easy to forget your tone isn't coming from a decent valve head and a rack of pro effects, and the sounds cover every need and most are very authentic. Despite the high power and dual speakers, both combos are very portable making them ideal for small pub and club gigs.