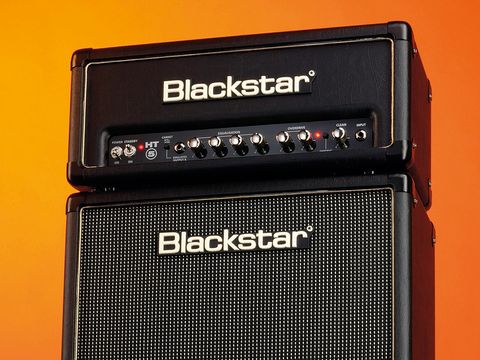 Quite simply the HT5 is a great amp that we think is going to fly off shelves.

It may not be the first time that a company has taken a stompbox and turned it into a fully-fledged amp, but when that company is Blackstar you can expect the result to be special and not just another run-of-the-mill formula design. So here's the latest amp from Blackstar, which we're tipping to be the runaway success of 2009.

Based on Blackstar's best-selling valve-powered HT pedal range, the HT5 is a straightforward two-channel design with a shared EQ and a push-pull power stage based, rather unusually, on a single 12BH7 valve.

Normally one output valve means single-ended pure class A, however, the 12BH7 is a twin triode with two separate amplification stages in one envelope, very similar to the ECC82 or 12AU7 with slightly more power on tap.

These two amplification stages make it possible to use the more efficient push-pull configuration that 90 per cent of all valve amps use. While the 12BH7 may not be as well known to guitar players as the more common 12AX7 twin triode, it was used on earlier incarnations of the venerable Ampeg SVT and is quite popular among homebrew hi-fi enthusiasts.

The HT5 is available in three formats: a 1 x 10 semi open-backed combo and a very portable mini-stack called the HT5-S, comprising a head and two 1 x 10 closed back cabinets. The head is available on its own as the HT5-H.

All the woodwork is very neatly done and covered in tough black vinyl to a good standard. The overall look of head and speakers is typical Blackstar - classic styling done well - which means that despite the reduced proportions everything has a tough, purposeful appearance.

This is carried over to the internals, with a robust open tray chassis supporting the HT5's electronics. These are carried on two printed circuit boards: one large one containing almost all the HT5's circuitry and a smaller one for the rear panel components.

It's worth pointing out here that both PCBs are through-plated and supported on metal stand-offs, which adds considerably to their long-term reliability and resistance to heat and flexing. The 12AX7 preamplifier valve is mounted directly to the board; however, the 12BH7 output valve is chassis-mounted to improve reliability even further.

This is a very impressive standard of build quality that wouldn't be out of place on an amp costing five times the HT5's price tag and it's typical of the attention to detail we've seen on other Blackstar products, which leaves some other manufacturers looking distinctly lacklustre in comparison.

The HT5's features are also pretty generous in the value for money stakes, with two foot-switchable channels sharing a three-band EQ and an extra control called Infinite Shape Feature or ISF for short. This clever voicing control started life as a temporary tool to help Blackstar's designers zero in on a particular tone and response, but it turned out to be so popular that it has ended up as a permanent feature on the amplifier.

The HT5 also includes a choice of eight- and 16-ohm loudspeaker outlets, enabling hook-up to a wide range of external speaker cabinets. There's a series FX loop with two preset levels to suit stompbox type pedals and rack units. In addition, on the front panel there's a headphone socket which also doubles as a speaker-emulated line out, with two different EQ settings that can mimic 1 x 12 and 4 x 12 cabinets.

As the HT5 is intended for practice and recording, it's important that hiss and hum levels are as low as possible, and we're pleased to report that unwanted electrical noise is practically non-existent.

The HT5's clean channel delivers sumptuous crystalline jangle at lower volume, with plenty of range from the bass, mid and treble controls to cater for single-coils and humbuckers. The ISF works best with lower settings of the mid control, adding a subtle but noticeable change to the HT5's response.

It does exactly what Blackstar says - changing the amp's basic tonal centre from the UK to the USA, going from a sweet and woody mid-range to a tighter bass and more aggressive mid emphasis.

There isn't a huge amount of headroom available - that's hardly surprising given the five-watt output stage - however, with the clean volume control set to slightly less than halfway, the HT5 delivers a highly addictive chime effect, where the 12BH7 is just starting to clip. Turning up adds progressively more distortion until at full volume you will have a pretty respectable crunch from single-coil pickups and more with humbuckers.

The HT5's lead channel builds on this promising start with a nicely judged gain range that provides everything from mildly overdriven to screaming classic rock ballad stuff, but it's the fact that you can get that huge 'everything on 11' effect at relatively benign sound pressure levels that's most surprising.

This is the trick that the HT5 pulls off best of all: it doesn't sound like an overdriven small amp, rather, at full power with everything flat out, it sounds like a big 100-watt amp in total meltdown yet at a volume that won't curdle your brain cells.

The custom 10-inch Celestion drivers are rated at 40 watts, so the speakers are never under any stress, no matter how much tonal mayhem you let loose. To top things off, the headphone/ recording outlet does a very good job of cramming all that tone into headphones and needed very little EQ to get a good balanced sound through a desk.

Beyond any doubt Blackstar's HT5 is a superb amp for recording and practice, in addition to being the perfect amp for any pro or amateur studio. Could you use it live? We think it sounds powerful enough to cope with a small gig, although you would need a little extra punch to get full use from the clean channel. However, hook the HT5 up to any decent PA and you'll have a great tone that will sit well in any environment and at any volume.

The price makes the HT5-S excellent value for money and effectively annihilates all but the most serious competition. We reckon it's likely to find a lot of dedicated fans and we suggest you order yours now. There might be quite a rush.