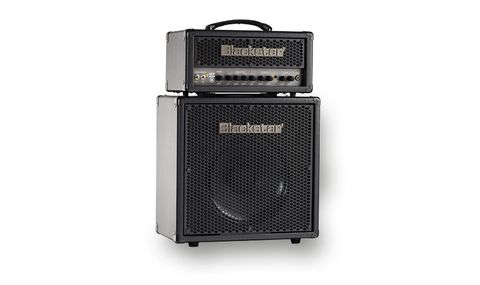 Run this head through just about any cab in any studio, and your heavy tones are sorted - it's as simple as that.

Get your palm-muted chug and breakneck riffs in check, because Blackstar has created a new line of monster amps with one primary directive: all-out aggression. Here we're looking at the five-watt HT Metal 5H head.

An all-valve amp, the HT Metal 5H boasts Blackstar's patented ISF (Infinite Shape Feature) control, which grants you access to the biggest metal tones from both sides of the Atlantic, plus a speaker-emulated output, mp3/line input, footswitchable channels and a full EQ set, meaning it's just at home in the bedroom as the studio or small stage.

Tonally, it sounds like a supercharged version of Blackstar's HT-5R - no bad thing. Plug in an active pickup-equipped axe and the Metal 5H spits out ream after ream of classic metal tones, the ISF control getting you pretty damn close to everything from Dimebag to Maiden.

We found the HT5 a little dark - plugged into the accompanying 408 (£199) or 112 cabinet (£159), we had to keep the bass control pretty low, and the treble and mids high. That said, there's a terrifying amount of low-end available from the Metal 5H and an accompanying cab, and although the volume available might struggle to cut through at gig levels, there's enough of an aural presence to compete with a drum kit at band practice.

Flicking over to the clean channel, we found its name a bit of a misnomer. Since there's no master volume, the sound turns into smooth overdrive very quickly, so for actual cleans you'll want to keep the volume low.

The same can't be said for the distorted tones, which sound monumental at slightly-too-loud-for-bedroom levels. In fact, our favourite tones came via the Metal 5H cranked up with an extended-range guitar running into it - the bottom end is so tight and defined, it makes for awesome djent and chug.