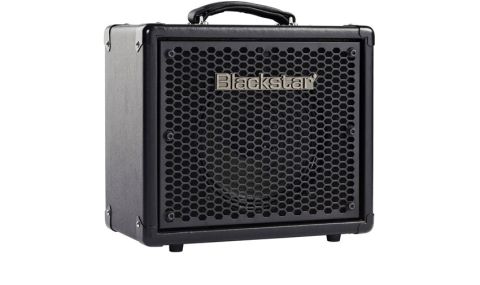 If you're after a combo for heavyweight bedroom jams and backstage warm-ups, this could be the HT Metal for you.

It's hardly the most intimidating of amps, but Blackstar's HT Metal 1 is still more than capable of delivering bucketloads of filth.

Based on the award-winnning HT-1 combo, it's an all-valve one-watt amp for bedroom-dwelling fans of heaviness, featuring a speaker-emulated outputs and mp3/line input, plus Blackstar's patented ISF (Infinite Shape Feature) control.

Two channels offer a wealth of overdriven options, but Blackstar hasn't forgotten about those cleaner moments, either, offering up a handy digital reverb.

Aside from its light weight, the first thing you notice about the HT Metal 1 is the surprising amount of bass it puts out, despite only packing an eight-inch speaker. That makes for tight and defined gained-up tones, which further defy the diminutive stature. Low E-string thrash and detuned riffs are no problem; the speaker never threatens to flub out or fail to deliver.

And with the ISF control, you can sculpt tones from British crunch to American grunt, letting you dial in your favourite sounds from metallers past and present. However, as much as we love the ISF control, an EQ knob wouldn't have gone amiss here, since the Metal 1 could be a little bassy for some players, especially if the amp's positioned on the floor.

Nonetheless, it makes for a seriously portable metal practice amp, complete with authentic valve tones, and it comes in handy in the studio, too - small combos give a unique, slightly honky tone that sits well in a mix, and the HT Metal 1 is no exception.