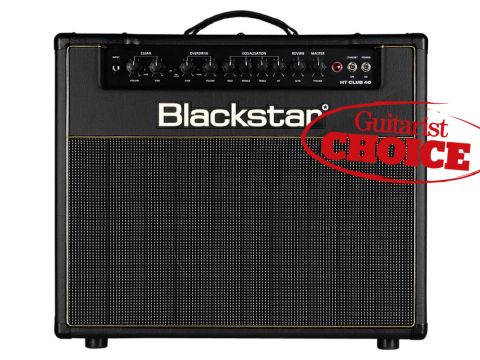 The HT Venue series sets a benchmark for affordable performance. Plug in as soon as you can!

Blackstar's continued march towards world domination in the guitar amplification market has seen the release of some seriously good amps at very affordable prices. It started with its delectable hand-wired range and was followed by such gems as the Gold Award-winning Series One 45-watt combo and the awesome little HT-5 head, which we predicted would be a runaway success and apparently still sells faster than Blackstar can make 'em - it's an enviable situation to be in under current market conditions.

Now it's time for Blackstar to address the highly competitive mid-priced market: enter the new HT Venue range. Making their debut at the 2010 Winter NAMM show, the HT Venue amps are intended to give the working musician maximum bang for his/her buck.

Like all the Blackstar products we've seen so far, the Club 40 1 x 12 combo is superbly crafted. The satin black-finish vinyl covering is applied without any cuts in the corners, something that many amp builders seem incapable of. It looks impressive and although the HT Venue range's styling may seem a little utilitarian at first glance, the attention to detail lifts it above the competition.

The electronics are held on a robust PCB, which is adequately protected inside a tough steel chassis and holds practically all front and rear panel components. There's particular attention to detail in the layout and component choice that leaves you in no doubt about Blackstar's devotion to getting every last aspect right.

The overall impression is one of reliable capability - these are amps that should thrive in the unforgiving world of club gigging and will easily handle being chucked in a car boot night after night without losing their good looks.

The combo is a two-channel design with separate EQ controls and digital reverb. There are controls for volume and tone on the clean channel, with a familiar gain and volume arrangement on the overdrive channel.

The overdrive channel's EQ combines bass, mid and treble controls with Blackstar's now-familiar ISF (Infinite Shape Feature). This disarmingly simple control sweeps you from a typical American tone to a more Brit-influenced sound, with every conceivable point in between. Originally developed as a tool to help Blackstar's R&D team dial in amps for artist customers, it proved so popular and easy to use that it's now a permanent fixture in many Blackstar designs.

Topping off the front panel are master controls for volume and reverb. Around the back there are sockets for the integral series effects loop - with a useful level switch that accepts stompbox-type pedals or semi-pro rack units - and a speaker-emulated recording output.

The Club 40 combo's capabilities are considerably expanded by the addition of a pair of voice switches for the clean and overdrive channels and a handy tone switch for the built-in digital reverb. Channels are footswitchable, and you can also toggle the reverb on or off remotely.

The recording output is very clean as far as noise is concerned and makes it easy to get a good 'real' amp tone onto your PC or portastudio with a minimum of fuss.

The Club 40 combo uses EL34 output valves and Celestion speakers, which should give you an idea of what tonal ballpark the amp sits in. Check out the following audio examples to hear it in action:

The clean channel voice switches preamp gain, voicing and power amp damping to give Class A performance in 'boutique' mode, with shimmering cleans that can be wound up into a very tasty chiming effect. In 'modern' mode, the power amp is reconfigured to Class AB for extra clarity and a tight, snappy bottom end.

The overdrive channel's voice switch swaps between a tight, crunchy overdrive to one with a much fatter mid-range and less power amp damping for a completely different response that's looser and much more dynamic. The simple 'reverb tone' switch on the Club 40's rear panel provides either a bright, zingy decay or a darker and warmer effect, making it easy to achieve authentic vintage surf and sixties sounds, through to more modern fusion tones.

The Club 40 packs an enormous amount of tone into an unassuming layout that makes it a real pleasure to use, with plenty of volume for gigging. Blackstar's HT Venue range is a big hit with us so far; we're more than a little surprised at just how flexible and responsive the amps are, yet they are blessed with straightforward controls that make them simple and intuitive to use.

Full marks for the clever voice switches, too, which do exactly what they say and make for a very rewarding sonic experience that you don't often find, even on amps costing over £1,000.

The Club 40 is ideal for enthusiastic semi-pro and amateur use and should last for absolutely ages. In this very competitive price bracket there's a lot of very worthy competition that's fighting hard for your money and the Blackstars are not the cheapest products out there. They are, however, among the very best.