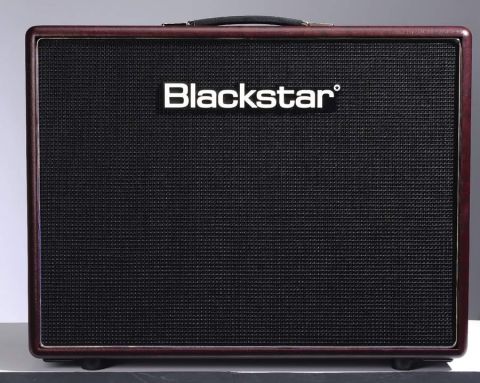 Based on this superb example, Blackstar is going to be a very hot name in guitar amplification.

Formed by two of the most influential amp designers in the country, Blackstar Amplification has been working for a long time to launch its products and we've been straining at the leash to get our hands on its hand-wired Artisan A30 combo. Well, here it is...

Designed in Northampton and made in Korea, the Blackstar Artisan benefits from the considerable knowledge of Ian Robinson and Bruce Keir, who in a previous incarnation were responsible for some of the best amps and pedals to come out of Bletchley in recent years.

The amp has the same sort of build quality we've become used to seeing from some of the top names in boutique amp construction. The joinery standard is clean and neat, with a nice consistency to the large radius dovetailed corners.

Look closer at that rich ruby red vinyl covering and try to find the cuts on the corners; there aren't any, just a couple of small triangular infill pieces on the tight inside corners surrounding the control panel.

Apart from that, the vinyl is applied so well it looks almost as if it's been sprayed on. The electronics live inside the cleanest chrome-plated chassis we've ever seen. It's tough, heavy-gauge steel and it needs to be because the transformers are substantial - in fact, considerably larger than those used on some manufacturers' 100-watt models.

The rest of the electrical components live on a long turret board that runs almost the full length of the chassis. Turret board construction is typical of many early British amps; you start with a long strip of insulating material, such as Paxolin or GRP, and drill holes in it along both edges.

Into these holes you hammer the turrets - small nickel silver posts about 10mm high. The components are attached to the turrets, with link wires between to make up whatever circuit you need. It's relatively easy to service and, if done properly, very robust.

The standard of wiring is exceptionally high - the turret board itself is fixed to the chassis with metal stand-off bolts, all the components have two or more turns around each turret post, and all the wires are properly laced together and pushed into the chassis corners in order to minimise mains hum.

It's also worth pointing out that the soldering is remarkably consistent; not including the valves there are about 70 resistors and capacitors on the A30's turret board, which means a total of around 250 solder joints, and every single one is perfect with the last just as good as the first.

Designed primarily to appeal to purists, the amp has a relatively straightforward control layout with a few boutique twists. Also, the dual input arrangement means you can link both channels together using a short patch lead, adding a lot of flexibility from a deceptively simple layout.

Given the spec and build quality, tonal expectations are high and we aren't disappointed. Tested with a standard Fender Strat and a PRS McCarty, the A30's complex preamps delivered an extraordinary flexibility.

The bass control on Channel 1 makes it a snap to dial in any tone from practically any guitar - distinctive bell-like cleans, fat jazz growl or a biting twang that's perfect for country picking.

Channel 2 is easier to get a handle on: push up the gain and volume, select American or Brit sauce and let rip - it's a phenomenal medium gain lead tone that any blues-rocker will love.

Used in single-ended Class A, the amp warms up and overdrives much easier at a lower volume, with a softer and more rounded quality when pushed hard. Noise is practically non-existent - there's the tiniest bit of hiss from the high gain channel, but that's really it.

The A30 represents a stunning debut by Blackstar into the world of high-end guitar amplification. Designed to appeal to purists and best suited to vintage blues, rock, country or pop sounds if used on their own, there's a lot of tonal flexibility from this amp, and the quality of that tone is simply outstanding.

However, you need to run it quite loud to get it, so those looking to use the amp at home would be best advised to pick one or more pedals from Blackstar's superb new range to add low-level drive.

Value for money needs to be considered carefully here. On the face of it the amp is relatively expensive, until you weigh it up against the proper competition.

We're talking top-drawer build quality and tone, which you'd have to go to the likes of Carr, Divided By 13, Victoria or THD to match, and compared with this kind of exotica the Artisan starts looking almost too good to be true.

Don't think that just because the A30 isn't made in a Californian vineyard or Texan bayou that it isn't up there with the best. It is frankly staggering in terms of quality and sonic range.

If you're looking for a boutique hand-wired amp, the new name to start asking for is Blackstar. You won't be disappointed - we guarantee it!