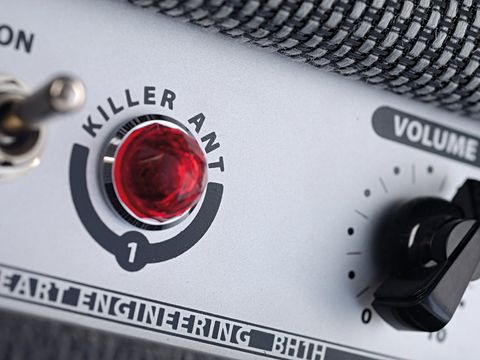 Pound-for-pound, the ant is the hardest mutha in the animal kingdom, and it's a principle that Blackheart Engineering have applied to this small-but-deadly Class A mini-stack.

At just 0.25-watts, Blackheart has the Killer Ant head earmarked as a purchase for "apartment dwellers and recording sessions, delivering the tone and attitude you want when volume needs to be kept at bay".

There's serious spec at work, from the valve 'power block' to the boot-proof birch construction, but the knob count is firmly in the vein of old-school 60s models with just one master volume to play with ("the rest is up to you," says Blackheart).

The Killer Ant head can be paired to a 4x12 cab, butdue to its dimunitve size, it might look ridiculous atop anything other than the 1x10 BH110 cab.

The Killer Ant is positively arrogant in its simplicity,but wehave to question whether this model will suit its target demographic. To get this Ant to roar, you have to drive the valves, which means cranking the volume, which means the bloke from downstairs banging a broom on the ceiling.

Conceptually, that got us frustrated, but the Ant fought back with a tone akin to an audio orgasm. Starting off warm and jangly, the output gets fat as you twist the volume, with frayed notes punching through the speaker and the valves responding to the light and shade of your dynamics. Screw the neighbours - we love it.