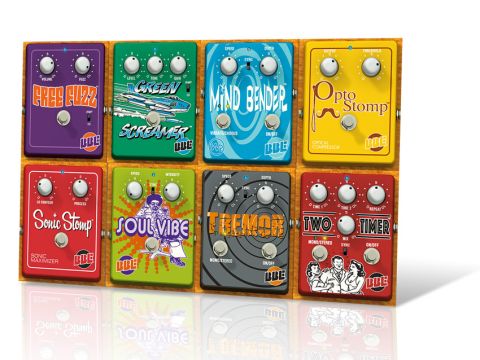 As with real guitar pedals, BBE's bundle o' boxes is simple yet effective, with plenty of rude 'tude (dude).

Guitar stompboxes have always been the punks of the effects world. After all, subtlety is usually the last thing on a guitarist's mind - when you put the pedal to the metal, you want the audience to know about it!

Here we have plug-in emulations of eight hardware BBE pedal effects, many of which are themselves inspired by vintage stompboxes of the '60s and '70s.

They come as discrete plug-ins, with no all-in-one pedalboard view, so to change the order, it's a case of dragging inserts around in your DAW - easier in some hosts than others. You'll typically run these pedals in front of amp sim software such as AmpliTube or Guitar Rig.

The Green Screamer is presumably an Ibanez Tube Screamer imitation, giving an overdriven valve tone. The depth, warmth and body aren't so far off the real thing and it's far more convenient.

The transistor-based Free Fuzz is a Big Muff/Fuzz Face-alike, but in truth, it's more fizz than fuzz and not as unruly as it should be.

Mind Bender is a modulation effect with simple Speed and Depth knobs, and a switch to flip between chorus and vibrato modes. It adds a rich creaminess to any sound but is best used in moderation unless you want a sound that's straight out of the '80s - like cornflour; just a touch is all you need to thicken.

Opto Stomp is an opto-compressor based on soft-knee units from the '60s. It's the most subtle of the lot but once you know how to set it and can hear that it's giving a constant 'in-your-face' level to your solos or vocals it's not one you'll forget. An invaluable back-room boy that's great because of its transparency.

Sonic Stomp is a pedal version of BBE's Sonic Maximiser hardware. It's got two knobs: Lo Contour adds fat low harmonics, Process lends excitement to the treble. Treat it as an EQ with bells on and you'll find it's perfect for bringing out the best in a sound.

Back to the more extreme: Soul Vibe is a vintage phaser-type pedal for sweeping rotary effects. It has a lovely, dense tone to it, though we'd prefer it if the Speed knob had a greater range, so that we could set it to go slower.

Two-Timer is a stereo delay pedal that does what it says. The long delays are warm, resulting in a rich effect akin to tape delays of old. The other stereo effect is Tremor, a syncable tremolo effect with panning and volume modulation.

All modulation and delay effects can be tempo-synced, and all the plug-ins will work on stereo signals when inserted on a stereo track, though you won't hear any stereo tricks like filter panning in the Soul Vibe, for instance.

In the real world, you can come across all sorts of signal level incompatibilities when trying to use guitar pedals for non-guitar sound sources. In software, though, it takes a second to throw on an insert and hear the results, and so anything you fancy can be subjected to the rudeness of these snazzy stompboxes.

The key is in mixing and matching the pedals in a similar way to how a guitarist would build their sound. For example, the Green Screamer adds balls and 'bite'. Team this up with the Sonic Stomp to add some really fat low end and rich harmonic overtones.

Chain that to the Opto Stomp and the compression puts the sound right up close and personal. Throw on the Two-Timer at the end of the line for some atmospheric delay and you have an authentic dirty lead setup that can be applied to a synth or even a vocal for extreme effects.

This is a set of guitar pedals in a very literal sense. The way you interact with them, the way they behave and the results from them are all much like the real thing, with that extreme, dirty quality that makes pedals so endearing.

Given the power of software, though, it almost seems a waste that the designs aren't taken further, but then again, that might flummox guitarists.

Hear our guitar run through a few of Stomp Ware's effects: